Distinctive craftsman a master of his trade

George O’Malley never deviated from his childhood ambition to become a skilled plasterer, and after 40 years is now a sought-after artisan 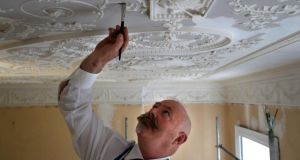 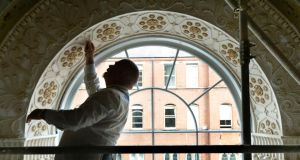 ‘You can often gauge the health of a society by the way it treats its heritage and old buildings,” says George O’Malley, Ireland’s leading master plasterer and specialist in the ancient art of decorative plasterwork.

He has just completed the restoration of the vast barrel-vaulted ceiling of St Mel’s Cathedral in Longford, bringing it back to its original 19th century classical magnificence, a spectacular achievement.

“It’s beyond belief what has been created by George and his lads – and their work rate is incredible with George’s burning inferno behind it,” says Ronan Moore, project manager of the €30 million restoration, one of western Europe’s biggest.

The cathedral burned down in 2009 after midnight Mass on a snowy Christmas night – a massive furnace sparked by an electrical fault in the crypt’s boiler destroyed most of its interior – even melting marble. Within days, Bishop Colm O’Reilly announced that St Mels would be fully restored. On Christmas Eve midnight Mass will once again be celebrated there.

For O’Malley, the ceiling challenges were enormous, particularly running all the elaborate mouldings in situ across the wide spans rather than by casting (which means making moulds and applying them), demanding professional craft skills and expertise. He devised a tracking system to do this and also points out that his materials – horse and goat hair, riven chestnut lathes and lime would have been the same as those used originally to reproduce the framework to shape the vault.

Though the logistics defy description, “old technology works a dream. The essence of lime is softness; it is soft in texture and composition and produces a soft colour”, he says surveying his work and pointing out the importance of shadow in decorative plasterwork.

Well known in conservation and restoration circles for his meticulous high standards and knowledge of specialist craft techniques, O’Malley’s plasterwork projects have included some of Ireland’s great houses including Castletown, Emo Court, Fota, Ligouri House UCD, Ledwithstown House, Longford and Heuston station. According to Peter Cox of Carrig Consultants, a leading stone and conservation expert, “he is by far the best we have in this country at his trade”.

O’Malley remembers restoring the ceiling in Newman House and discovering under the painted embellishment details of two birds – one a bird of prey and the other a grouse – being a keen huntsman he could identify them accurately. Regular work includes repairing or stabilising old ceilings, replastering and casting decorative plasterwork. With his dapper attire and trademark handlebar moustache, he cuts a distinctive figure and is a popular presence on site.

The eldest of five sons of Tom O’Malley, a master plasterer from Newport, Co Mayo, he has been working since the age of five. “I never wanted to be anything but a plasterer. My first piece was in 1967 when my father let us plaster a bridge he had built on the farm and it’s a job I am still immensely proud of. We only had lime and sand.”

His father honed his skills in England during the second World War working on bomb-damaged historic buildings in Oxford Street, Regent Street and the Oval cricket ground. Back home, Tom spent the next 30 years building and restoring houses in Mayo “and he used to ask people to let him run cornices in their houses free of charge to give us the opportunity to learn”, recalls O Malley.

He started working with his father in 1973 and then worked with his uncle George, a master plasterer in Dublin for a further two years before setting up on his own. “The big thing my uncle taught me was to think outside the box and that’s how I figured out how to plaster these big spans [in Longford].”

Plastering is a complicated trade and lime based stucco work is a fine art. “It takes a long time – seven years – to serve your apprenticeship and very few people are dedicated enough to stay the course. After that you have a further seven years as a journeyman plasterer working for others before coming back to your master. I have two men – Stephen Kelly, who has been with me for 20 years and Joe Black, who started when he was 15 and is now 30. Both are becoming outstanding plasterers, the best in the country. We have the skills to recreate or create from new”.

The restoration of the 26 angels in the cathedral, originally the work of Longford sculptor Terence Farrell, involved hand modelling by O Malley’s team and represent plastering at the highest level of the craft. His next challenge will be to restore four 9ft statues. He is also in the process of installing a kiln to make terracotta finials for McKee barracks.

O’Malley’s regret is that the day he signed the contract for Longford, his father died – a day short of 97. “He would have been so proud. He watched me becoming the kind of plasterer he respected and after 25 years conceded that I had. This is the pinnacle of my career, that’s for certain sure.”

Another major project for O’Malley is restoring the Michael Stapleton ceilings and murals, renowned for their neoclassical plasterwork, in Belvedere College, one of Dublin’s finest buildings.

“Our brief [in conjunction with RKD architects and conservation specialist David Slattery] is to remove 200 years of paint without damaging the plaster and it will be the first time Stapleton’s work has been exposed on this scale,” he explains.

He has discovered, for instance, that Stapleton was left handed, (based on his freehand style and signature), that a lot of his bigger work was “shop bought” and that his finest work was in situ modelling.

He has also scotched a widely held belief that when the Jesuits took over the building in the mid 1800s that they removed the Venus from the Venus room “because of inappropriate dress” and installed a simple centrepiece instead.

“We now know that’s all rubbish because we did an analysis of the materials from both sections and they matched exactly. So she was never there,” he says. “It is fascinating. That’s the kind of stuff that gets me out of the bed in the morning and off singing to work”.