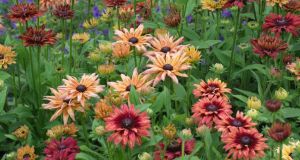 Rudbeckia ‘Sahara’, one of the must-have plants to grow from seed this spring. Photograph: Richard Johnston

Despite the cold, dark, mucky misery of an Irish January, I love this time of the gardening year for its newness and its whispered promises of good things to come. Humming beneath it all, of course, is that sense of impending busyness, fuelled by the knowledge that those most demanding yet in many ways most magical months of the horticultural calendar – February to April, when the all-important business of seed sowing must begin in earnest – are only just around the corner.

For that same reason, while the childhood me made for a very poor sort of a Girl Guide – much too forgetful, untidy and unpunctual to earn those coveted badges – it’s at this time of year that the organisation’s famous motto “Be Prepared” comes guiltily to mind, like the ghost of gardening years past.

Being prepared, if you love to raise plants from seed, means that January is the month to get in supplies of fresh seed as well as seed compost. It’s also the month to clean down seed trays/modules and ensure that you’ve a stash of horticultural fleece and plastic plant labels to hand as well as a reliably waterproof permanent pen to write on them (the best is Edding’s 140S). It means scrubbing down the glasshouse/polytunnel, checking that the electric propagator is working and clearing away cluttered sunny windowsills in preparation for the baby seedlings that will soon need these bright, frost-free spots.

It means straining your ears to listen for the distant crack of nature’s starter pistol, the signal that another gardening year has begun and the race is on. In that spirit of anticipation, here’s a look at some of the very best seed suppliers out there. Order from them now while stocks are still high, or delay at your peril.

But just a few more words of advice before you plunge headfirst into the heady delights of this year’s crop of seed catalogues. Firstly, try to begin with some sort of shopping list, whether that’s your favourite varieties of tomatoes or your must-grow summer bedding plants.

Secondly, be familiar with the shorthand used by seed merchants to categorise plants. For example, the letters HA after its name mean that the variety is what is known as a hardy annual, a short-lived plant that flowers, sets seed and dies within a year, while HHA stands for a half-hardy annual, meaning it’s a similarly short-lived plant but one that also requires careful protection from the cold until planted out in late spring. HB means one that carries out its life cycle over two years while HP means a hardy herbaceous perennial that lives for years. Bear in mind that seeds of some species will sometimes need special pre-treatment for successful germination so check the instructions carefully.

Thirdly, do your best to source organically-produced seed, free from environmentally disruptive chemicals such as neonics that have been linked with the decline of pollinating insects. By choosing plenty of open-pollinated varieties, you’ll also help to preserve biodiversity.

Last but definitely not least, have some fun. So pick a few varieties/ species that you’ve never grown before just for the sheer joy of trying something new. This, after all, is part of the great magic of gardening.

Brown Envelope Seeds in west Cork is not just a seed provider but an organically-certified producer of organic, open-pollinated vegetable, grain and herb seed, all of it grown on owner Madeleine McKeever’s smallholding on Turk Head peninsula in west Cork. Its catalogue is a brilliant mix of heritage and modern varieties, all chosen for their suitability for Irish growing conditions. Stars of this year’s catalogue include its selection of over 60 different varieties of tomatoes. (brownenvelopeseeds.com)

Galway-based Seedaholic offers an extensive and very affordable range of seed of over 2,500 varieties of both flowering and edible plants plus every packet comes with a useful information sheet that you can keep in a notebook or laminate to use in the garden/polytunnel (seedaholic.com)

UK-based Chiltern Seeds is the place to go to find seed of the most fashionable varieties and choice rarities including this year’s must-have: the gorgeous annual Rudbeckia “Sahara”, a plant so popular that its seed was as rare as hen’s teeth in 2017.

Owned by the well-known County Leitrim-based organic gardener and author Klaus Laitenberger, Green Vegetable Seed offers an excellent selection of varieties of vegetables chosen for their productivity and suitability for the Irish climate. (greenvegetableseeds.com)

Dedicated to the preservation of traditional/native varieties of fruit and vegetables, Irish Seed Savers’ Association offers seed of a fine selection of open-pollinated rare and heritage varieties of vegetables as well as a small amount of ornamentals, all grown and saved in Ireland. (irishseedsavers.ie)

For an excellent peat-free seed compost, try Klassman Organic Seed Compost, which is available to order from fruithillfarm.com or quickcrop.ie. While seed trays/modules are widely available from good garden centres, Cork-based Fruithill farm stock a particularly high-quality, durable selection (they also sell horticultural fleece by the roll). A heated propagator is another really useful tool that I’d also highly recommend – again, you’ll find these in most good garden centres in a range of shapes and sizes but recommended Irish suppliers include mrmiddleton.com, johnstowngardencentre.ieand quickcrop.ie.

The recent heavy rain means that most soils are far too wet to work on, so stay clear of borders and vegetable beds as well as lawns until conditions improve as you’ll only harm the soil structure and cause compaction, leading to greater problems with waterlogging and poor fertility.

If you sowed sweet pea seed in the last few months, then it’s important to nip out the growing tips of the young plants once they’ve produced three to four sets of leaves so that they go on to make strong, bushy plants. Avoid the beginner’s mistake of mollycoddling the young plants by keeping them in a warm room as too much heat/too little light will only make them weak, leggy and pale.

Instead, place them somewhere bright but cool, ideally in an unheated glasshouse or cold frame (a makeshift version of the latter can be easily constructed out of old window frames or even upturned large plastic boxes) for transplanting into the garden in late March/ April. Remember to take proper precautions against rodents and slugs, which like to eat the buried seed/emerging foliage.

January is a good time to prune various sorts of shrubby/woody plants, from currant bushes and many kinds of fruit trees to deciduous hedges, wisteria and even the butterfly bush or buddleja. Always make sure you use clean, sharp tools to do so (secateurs, pruning saw, loppers) and try to carry out any extensive pruning work on a dry day to reduce the risk of pruning wounds becoming infected with plant diseases. For advice on the specific pruning requirements of individual species, see rhs.org.uk.