Cleaning up: Mrs Hinch is sweeping her way to the top 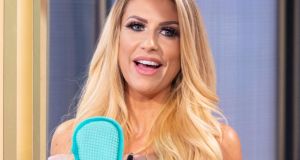 Hinch Yourself Happy: Sophie Hinchcliff has sold more than 160,000 copies of her book in the UK during its first week on sale

The spring clean season is in full swing if sales of the Instagrammer Mrs Hinch’s memoir-cum-cleaning manual, Hinch Yourself Happy, are anything to go by. Sophie Hinchcliff’s book has sold more than 160,000 copies in the UK during its first week on sale, sweeping it straight into number one position in the UK’s official top 50. And Hinchcliff will be in Dublin on Saturday to sign copies at a sold-out appearance at Eason on O’Connell Street.

After just three days the title has become the one of the top five best-sellers in the house and home category since records began and is just shy of the total number of paperback units sold by earlier generation of cleaning sensations, Aggie McKenzie and Kim Woodburn’s How Clean is Your House? It was published by Penguin in 2004, in a pre-social media era.

In the subsequent 15 years cleanliness has moved from being next to godliness to becoming a mindfulness technique in its own right. Hinchcliff, a self-professed worrier, admits in her book to living with anxiety, nerves and panic attacks but has found cleaning to be therapeutic. And it is her 21st century openness combined with old-fashioned cleaning hacks that have led to her viral appeal.

Cleaning is also lucrative. Marie Kondo’s four titles have sold millions, topping the New York Times bestseller lists and you could lose hours, even days, online to reading the gushing testaments of her followers.

Online a whole industry has grown up around the business of chores. Home decor shops have responded by stocking all manner of fancy brushes and tools to help make these tasks seem somewhat more glamorous.

Ostrich feather dusters come to mind. But there is more to them than just frippery, says Peter Kelly of Monkstown-based The Blue Door. They work really well at gathering dust motes because the feathers have natural static in them that attracts the dust like a magnet. In his shop a whole wall is merchandised with beautiful objects that double as cleaning tools.

German brush company Redecker is considered the Rolls Royce of the cleaning world and is stocked in smart shops such as the aforementioned Blue Door as well as Article in Powerscourt Townhouse Centre, Dublin 2, and The Old Mill Stores in west Cork.

Its use of natural materials combined with generational brush-making skills chime with the zeitgeist, says Kelly. “Customers are buying into its functionality: for example a telescopic cobweb brush, €46, that extends to 2m; or €72 for one that extends to 4.1m that you can angle to access coving in the high ceilings of period homes is a clever piece of kit.” Made of aluminium, it has horse hair bristles and folds back to fit into any standard-sized cupboard.

A venetian blind brush, €19, cleans out four fins at a time and could also be used on plantation shutters.

Another cracker is the table crumb brush. One, in the shape of a hedgehog, €13, is a bit of fun that could be used to encourage small children to clean up after mealtime, he suggests.

For bibliophiles there’s even a brush, €27, dedicated to brushing dust off that may gather atop your collection. Will Hinchcliff’s title, like the myriad of cookbook titles languishing on kitchen shelves, end up gathering dust? Only time will tell. For now though maybe we should join her, pull on a pair of rubber gloves and find joy in discovering the right product to shine the sink.

Valentine’s in an Irish restaurant: ‘Some couples barely speak to one another. Most don’t tip’
8

Tara Lynne O’Neill: 'I knew Derry Girls was something special'
10

A new way to make fishcakes that is quick, easy and delicious
Real news has value SUBSCRIBE