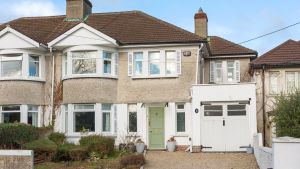 Number 18, Priory Drive, in Blackrock last changed hands about a year ago with the new owners, a young family, knowing that while the house could be moved into immediately, in the longer term they could extend and renovate. Their own plans have now changed but they leave behind architectural drawings by Keller Architects and planning permission secured to add 120sq m of space to the 130sq m house. They are now selling, and the house is on the market through DNG for €895,000.

Priory Drive is off Stillorgan Road, leading down into Blackrock and the houses, built mostly in the 1950s, are fine family homes with good gardens, well-located in terms of transport and schools.

There are four bedrooms and a family bathroom, a reception room that runs front to back – it was originally two rooms – a dining room (used as a playroom) and a small kitchen. The good-sized hall adds to the feeling of space on the ground floor and the curved bay windows to the front are a nice feature. The only addition made by the previous owners – obviously keen gardeners because the 30m-rear garden is beautifully planned and stocked – is a small sunroom off the dining room. There is a garage to the side and off-street parking for two cars.

The plans build out across the back of the house with a two-storey extension, to the side and up into the attic. The neighbours appear to have done something similar without significantly compromising the rear garden. To build it was costed last year at about €300,000. The extension which reworks the bedroom accommodation as well as building a vast eat-in kitchen/living space would transform the house. However as it is presented as a comfortable family home with ample accommodation it could just as easily be moved into immediately, and – with plenty of time to run on the planning permission – you can defer the work until settled.