Georgian on right side of genteel Ranelagh square for €1.35m 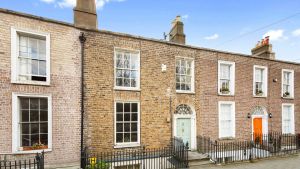 A house on a Georgian square is always going to have a certain cachet and Mount Pleasant Square in Ranelagh is one of the most sought-after addresses in Dublin 6. It’s not actually a square though: built in the early 1800s it has just three sides, two of which form crescents and all front on to a railinged square which is now the location of a popular tennis club surrounded by a well tended – by the city council – public park.

The owners of number 40 Mount Pleasant Square – on what is often referred to as the “good” side of the square because of the south-facing gardens – was bought about 30 years ago and carried on considerable improvements about 20 years ago which brought the house to 222sq m (2,390sq ft).

That included adding a single-storey extension to the rear to make space for an open-plan kitchen and dining area and a small home office area. It opens out to a Liscannor patio and a lawned rear garden. Several roof lights and windows make this south-facing extension a particularly bright room.

Many other houses on the square have been renovated in recent years and one of the biggest decisions faced by new owners is where to put the kitchen. Nowadays that tends to be at hall level in what was a reception room, though some still locate it in the basement where it would have been originally, while others go for this rear extension option.

In number 40 that choice means the four bedrooms – three are doubles – are on different floors, one is in the basement, three are up on the first floor. The single bedroom was created by dividing the front bedroom and new owners might consider reversing that to create a large bedroom with two sash windows overlooking the square.

Also down at basement level is a utility and wet room. The family bathroom is in the first-floor return.

Up a couple of granite steps, the front door retains its original Georgian fanlight and it opens into a nicely proportioned hallway. There are two interconnecting reception rooms, divided by folding doors, both with period cast iron fireplaces which may not be original but work well in the rooms.

The basement appears to be under-used so viewers will be using their imagination as to how they might use the space. They will be buying with a degree of renovation – and redecoration – in mind.

The 25m (81ft) back garden will prove a key attraction for growing families. Parking is on street. Lisney is the agent selling number 40 Mount Pleasant Square, seeking €1.35 million.