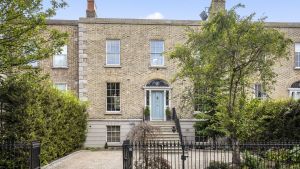 Now back in the market for the second time in just two years, number 26 Castlewood Avenue in Rathmines has likely seen as much sales activity in the past 11 years than in its previous 100. While the front facade – double-fronted with sash windows, fanlight and original door atop a flight of granite steps – would be recognisable to its Victorian-era builder, it was bought by a developer and comprehensively renovated and extended (along with its neighbour, number 27) in 2006.

Looking at it from the rear where a black-clad angular three-storey return dominates, there’s no doubt that this house was the subject of a serious, thoughtful and determinedly contemporary redevelopment. Inside too there’s a careful mix of original and modern – at hall level, period features were restored or replaced – in the interconnecting reception rooms on one side of the hall there are matching marble fireplaces, one of which is reproduction. On the other side is a very grand, beautifully proportioned reception room running from front to back, with tall sash windows at either end.

Where the house feels interiors magazine-style contemporary is in the kitchen – with its glass-panelled staircase – and its many bathrooms.

Accommodation is spread over 205sq m (2,200sq ft) and the first of the house’s four bedrooms is in the basement to the front alongside a large bathroom. A polished terrazzo floor runs throughout this level and to the rear is the large open-plan kitchen with its cream Beromi kitchen, large island unit and integrated Siemens appliances. The seating area opens out to the garden – grassy with a large patio and big enough for a town garden – through oversize glazed doors.

On the first floor, there’s a dramatic monochrome bathroom, and the main bedroom has two large double windows, an original fireplace and a smart en suite. There are two more double bedrooms at this level.

The coolly modern, architecturally pleasing space on the top landing dominated by a vast glass window has been put to practical use: the current owner has installed a huge walk-in wardrobe and a platform lounging space.

When the house came on the market in 2008 post redevelopment the timing was not good and it failed to achieve its €3 million price tag despite subsequent price drops and attempts to sell. By the time the current owners bought in 2017 it had been empty for more than five years. They paid €1.69 million (€600,000 over its market-tempting asking price).

The family are now moving abroad for work reasons, reluctantly leaving the house which they loved for its family-friendly space and convenience. Number 26 Castlewood Avenue, a protected structure, which is set back from the busy road and has off-street parking for several cars, is now once again for sale, through DNG, asking €1.5 million.