Before and after: Garden room extension, no planning required 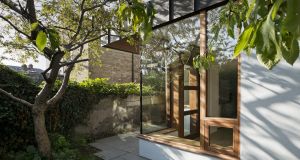 The glass details in particular are very refined, and functional. Glass to glass corners effectively make the corner of the new room disappear into the garden, framing an existing tree and bring the garden into the room.

There is a saying that simplicity is the ultimate sophistication. This springs to mind with this uncomplicated 20sq m extension – exempt from planning permission – added to a typical terraced house. With one singular design move, it has been transformed both inside and out, making the extension much more than just an extra room at the back of a house. As with all things that appear simple, it required a lot of work to look so effortless.

Extending any home, or adding a new room at the back of most houses usually throws up the same problem as to how best to retain natural light in the original body of the house. Done incorrectly, a whole new problem can arise when you end up with a “room in the middle” scenario – which can be notoriously difficult to resolve.

These rooms inevitably become dark, unresolved transitional thoroughfares as owners try to figure out whether to put a sofa in there or not. Often, the answer is the introduction of a courtyard.

I love courtyards. They are nothing new, in fact, they have been used in architecture for as long as we have lived in anything approaching a house. In essence, it’s a series of rooms arranged around an open space, and when extending houses like this they are very effective because by pulling the new away from the old; you allow both elements of the house to exist in their own right.

This allows light to still filter into the main house, and means the old and the new are now bonded to each other around this newly formed external space.

They don’t need to be overly big (this one is about 3sq m) but they very cleverly can achieve so many things. They work on a purely functional level, but they’re also kind of magic. You’re creating your own enclosed oasis, seen from all angles within your home, and totally private to the rest of the world.

In this design by Stephen Mulhall (NineteenEighty.ie), the timber-lined courtyard at the rear of the existing house is accessed from a new lobby, that also now houses a shower room. The courtyard allows this to happen. It enhances the floorplan to provide access, light and even additional utility spaces into the house. It gives something back.

An understanding of light was key here. The new room takes advantage of views of the rear garden and opens up to the southeast light. Its area is minimised to accommodate the existing trees and planting, and by creating a tall ceiling height and pulling light in from both sides, this ensures a feeling of spaciousness in a relatively small space.

The detailing, and choice of material is beautiful throughout. The external roof overhang provides a covered outdoor space, which means the transition between house and garden is itself a usable area. Bespoke hardwood timber windows and doors include frameless corner glazing, a high-level clerestory window (looking back towards the main house), and a full-height glazed door leading from the existing entrance hall into the new extension.

Though relatively small, this project – primarily to open up the kitchen return to the light and to create some additional space – was far from straightforward. The rear garden was northeast facing; there was a limit to the extent of encroachment into the garden in order to preserve the existing mature trees. In addition, the existing orientation with the immediate neighbouring properties imposed particular constraints.

The space that has been delivered not only meets the challenges of the brief but has an impact, both from inside and out, that one would not have imagined possible on such a restricted footprint. Small, is indeed, beautiful.

Michael Harding: I was in my underpants, finishing off the pint...
2

Tesla’s next-gen Model X: A frustrating €95k drive – but everyone else will love it
3