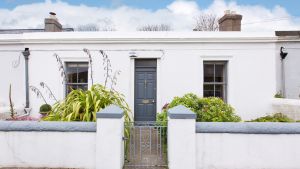 Blackrock in Co Dublin isn’t short of terraces of pretty looking period houses but Sydney Terrace is particularly attractive. A short road off the little roundabout on Avoca Avenue and connecting to Green Road, the single-storey 19th century houses that line one side of the street look smart with their sash windows and painted stucco.

Some have been extensively renovated and extended in recent years but number 6 Sydney Terrace, which is now for sale, was renovated some years ago and is ready for another makeover.

It might have strong appeal for downsizers from larger period houses in the area who like the location – within walking distance of Blackrock Village – and want a smaller period house with a manageable garden and are prepared to renovate.

The previous renovation changed the house’s internal layout. Originally it would have had four rooms, two reception rooms to the front off a narrow hall, two bedrooms to the back and a scullery to the rear.

In the changed layout that exists today, the front door opens directly into a large living room that runs the width of the front of the house – the walls of the hallway having been removed. It has high ceilings, two tall sash windows and a fireplace – not the original – and a mirror in the ceiling to throw more light down into the room.

A wide archway leads to the rear where there are two bedrooms, one on either side of the rear hallway, both look out to the back garden. A single-storey flat-roofed extension at the rear made space for a bathroom and an eat-in kitchen.

New owners could move in but it is most likely that they will consider a major revamp – including possibly reworking the extension to make it two storey to add an upstairs bedroom and bathroom, and a more contemporary kitchen. The mature rear garden is 18m long and comes with pedestrian access which adds to it greatly. The BER is G which will again encourage new owners to do some upgrading.

The terrace of houses is set back from the road with a small walled front garden. Parking is on street. 6 Sydney Terrace is for sale through Sherry FitzGerald for €795,000.