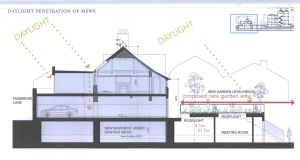 A page from documents lodged in support of Ronan’s application, showing the proposed basement space at the bottom of the image.

A number of residents in Dublin’s Fitzwilliam Square are up in arms over plans by one of Ireland’s best known developers, Johnny Ronan, to go underground.

A number of objections have been lodged with Dublin City Council against Mr Ronan’s planned office extension beneath his Fitzwilliam Square house that would run the length of the property’s garden and finish under a mews fronting on to Pembroke Lane.

Local resident James O’Donnell told the City Council he is worried his “house will be undermined by digging the basement”, while an objection lodged on behalf of Kelley Smith and Aidan Walsh said the proposed development “presents a significant risk to the residential amenity and stability of neighbouring properties”.

In their objection, Frank Callanan and Richard Callanan pointed to a house in London which began to subside, pulling its neighbours’ houses down with it after a homeowner began to excavate his property to make way for a subterranean play room for his children.

The Callanans said the type of work proposed in the Ronan plan “is relatively novel in this city so it beholds us to look to the experience of other cities, in particular London, where they have some experience of this type of development”.

An objection lodged on behalf of Amaska Holdings ULC said the development of basement accommodation is a recent phenomenon “and if the current proposal is permitted, it will undoubtedly set an undesirable precedent for such development in the city, particularly within Georgian squares”.

Seven objections from property owners were lodged, along with one from the Pembroke Road Association.

An Taisce is supporting the residents’ position.

Kevin Duff of An Taisce’s Dublin City Association said the planned excavation has significant geological and structural impacts for adjacent properties and should be refused planning permission.

Mr Duff said the plan is not an appropriate form of development for Dublin’s main Georgian areas due to the imperative for minimal intervention in work to Georgian Protected Structures.

Consultants for Mr Ronan, John Spain and Associates, say there will be no significant negative impact from the development on the Architectural Conservation Area (ACA).

Mr Spain said the works “will ensure the long term future of the protected structure by keeping it in active use in a suitable form for potential occupiers”.

The most exciting Irish restaurant, from a young team, in years
5

Chinese new year: celebrate the Year of the Rat with dumplings
6