Before and after: a fresh take on the standard dormer

Declan O'Donnell: This transformation is a classic example of how a well-interpreted design brief is critical to delivering a successful project 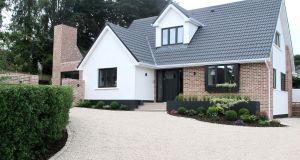 The original tall chimney breasts formed part of the new design thinking behind the form of this extension and refurbishment – culminating in a striking new form. Photograph: Flávio Lombardo Architects

The design brief (which is effectively a wish list from a client) and how this gets interpreted, is usually where a project is won or lost. In my experience, it is everything over and above what is asked of the architect that makes the difference in delivering a successful project, for everyone involved.

The brief for this bungalow transformation would be fairly typical of any refurbishment project and called for an open plan kitchen, dining and sitting space, a play room, a study and four bedrooms with one en-suite.

An extensive list of rooms and spaces for a growing family, to future proof the house for the years to come, all to be squeezed into a standard Irish bungalow. Bringing the practicality and function of a building to life,while creating genuinely inspiring spaces was the goal for architect Flavio Lombardo who understood that starting with a standard building is no excuse for not doing something special.

The original bungalow had a series of disconnected rooms at ground floor level, with two bedrooms and a dormer bathroom upstairs, so a significant remodelling and increase in volume was required to accommodate the new layouts and rooms as required. There were some features that the architect evidently earmarked as design drivers for the new extensions, namely, the elongated chimneys. There is an elegance to these, even on the original building, that I am sure formed the basis of the new forms to be added onto the original house. The result is something of a hybrid between old and new, a re-boot of the original if you will.

The footprint and pitched roof form of the front has been maintained, however, a new two floor extension has been added to the back of the house. This is major surgery for houses in terms of infrastructure so a new staircase has been positioned at the centre that allows optimal access and layouts for the three bedrooms on the first floor. The kitchen, dining and open plan space is then freed up to be housed in a new brick clad, ground floor extension to the side. Good layouts are the blueprints for good living and this always needs constant refining and focus to get the house working but more importantly to allow the people who live in it be as comfortable as possible.

The exterior of the building is where things get really interesting.

There is a clear marking by mass and colour between the original appearance of the existing house and the new additions. Originally the house was painted white, with some brick detailing and this is still the case, but the dialogue now includes the new brick extension. The chimney reference is clear to see and the sculptural elegance of the new brick chimney makes what could have been another box on the back of a house, much more interesting and engaging.

The rear two-floor extension has been painted black, again to give definition to this new element, but it’s a subtle and simple trick to avoid the various forms becoming confused and cluttered. The rear ground floor extension with the black steel beam and the same brick walls link these three elements together to form something new.

Dormer type extensions can be difficult because their shape is difficult to resolve against the original. Here, colour is the secret. Painted black, it regresses this form, allowing the traditional forms to ring true. Subtle, yet very effective, and I am sure nobody asked the architect to paint the side of their house black. Turns out, it’s just what was needed.

Declan O’Donnell is an architect and founding partner of ODKM Architects, and occasional television presenter