The house is of its time and, while interesting, it will need to be renovated and modernised 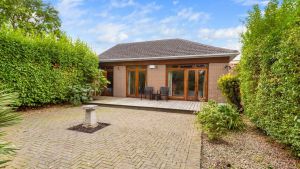 It’s always interesting to see an architect’s own home particularly if they have designed and built it for themselves. Number 3 Henley Court was built in 1972 by the late Brian Conroy who was then, and for subsequent decades, a busy architect working on large commercial projects including the Blackrock Clinic.

It and the two neighbouring houses were built on a large plot of land at the rear of the 1950s-built Henley estate off Lower Churchtown Road. Of the three houses designed by Conroy, number three, which became his own family home, is the only one in original condition; the others have changed hands and been renovated in recent years.

Named Louisiana after the modern art gallery in Copenhagen, this hints at the design influences. A fan of Scandinavian design, to the front of the single-storey house is a covered car port for two cars with brick pillars.

Inside the house is of its time: the interior walls are mostly white-painted brick, with varnished timber-clad ceilings, some of the bedrooms with their built-in wardrobe and desks also feature cork or timber-clad walls. The floors throughout are tile or timber and the teak window frames are left unpainted.

The house is U-shaped with rooms either opening into or overlooking an interior courtyard. There is also a good-sized low maintenance mostly paved rear garden.

Inside to the right off the wide hall is the main livingroom – a striking looking space with a cast-iron spiral staircase leading up to an enclosed mezzanine used by Conroy as his office.

At one end of this livingroom is an open fire and a window to the front; at the other, doors to the inner courtyard. An atmospheric room, one wall is lined with bookshelves, crammed with books on history and design.

Another door in the hall opens into the open-plan kitchen, dining and family room – also accessed from the main livingroom and also opening out to the inner courtyard. The rooms in this house flow into each other in a way that makes it feel larger than its 171sq m (1,850sq ft).

The galley kitchen – with its original laminate and wood units – opens into another small room, possibly originally a study or studio, and then out to the front of the house.

There are four bedrooms, none particularly large and one with an en suite, while the shower room off the inner hall was renovated in recent years.

There is an F energy rating, and new owners, even if they are keen to maintain the 1970s Scandinavian aesthetic of the house will need to renovate and modernise. Louisiana, 3 Henley Court is for sale through Vincent Finnegan seeking €750,000.