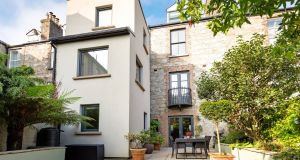 Price: €1.5million
Named for Sir William Stamer, a former lord mayor of Dublin, Stamer Street is home to some of the largest houses in Dublin 8’s Portobello. Number 19 is a very gently reworked, two-storey over-garden terrace with great ceiling heights throughout, fine original features and plenty of modern additions to suit contemporary living.

When its owners, who both work in the film sector, first bought the property it was divided into flats. While it had a great bone structure, they took on OCA Architects to help contemporise it.

Owner Róisín O’Reilly is a make-up artist who has worked on a number of films and TV shows including Terry Gilliam’s The Brothers Grimm and ratings blockbuster, Game of Thrones. Using her excellent understanding of how the face should be lit for screen, she has channelled that knowledge into light design. An impressive glass and resin chandelier in the entrance hall is one of her designs and diffuses light in a flattering fashion, highlighting the fine stucco plasterwork.

Like the hall, the interconnecting reception rooms are now floored in herringbone pattern solid timber with sheep’s wool laid between the joists to insulate the space. The drawing room is located to the front, with a lovely oriel window washing the room in western light. Another of O’Reilly’s prototypes hangs overhead adding a touch of 20th century drama to the room. Designed with business partner Chloe Stevens, the light fittings can be made to order through their company The Light Works.

Interconnecting doors lead through to a music room to the rear where French windows, complete with espagnolette locking system, open onto a demi lune steel balcony which overlooks the east-facing garden. Ceiling heights at this level are over 3m and the timber fireplaces have tiled insets original to the house. These rooms look far finer in reality than they do in the photographs.

This space is bright and well laid out and has higher than average ceiling heights. A 4m-long dining table, made from the carcass of an old farmhouse table, and set with a new timber top by one of the owners, echoes the proportions of the large island that sits parallel to it, and is part of a bright white design by Italian outfitters Snaidero. Artemide lights sit flush with the ceiling above the table.

The living area is set around a French stove supplied by Ovne Stoves, run by Tom Keane and Claire Graham of the Old Mill Stores in Leap, Co Cork, and whose stoves have featured in several movies including the Harry Potter series.

There is a light-filled shower room on the return that has super views over the street’s rear gardens, while three of the property’s four bedrooms are located on the first floor. All doubles, one features a cream-coloured stove and tiled surround.

The bathroom on the next return has small windows that frame views of the city and at the top of the house is the main bedroom where a dormer window frames a similar view. Adjacent is a shower en suite with a large rooflight. The large room has gently polished walnut floorboards.

The garden, about 90sq m in size, is east facing, with a sandstone patio area and the rest set out in golden gravel with pedestrian rear access to a gated lane. Designed by Paul Cox of Annapurna, the planting includes black bamboo and a mature New Zealand fern.

It wasn’t until after architect Eavan Meagher returned to New York – where she and artist husband Cian McLoughlin had lived for a time – that she realised the inspiration for the extension to the back of her home was influenced by her time there.

“We wanted the extension [which houses the kitchen and built-in dining room] to look like it was part of the original garden wall, and it was only when we came back from a trip there that I realised the inspiration came from the industrial aesthetic of New York restaurants,” says Meagher, who works as an architect for the Office of Public Works.

Further evidence of this besides the exposed brickwork, is in the use of polished concrete floors and dark aluminium windows throughout the 134sq m (1,442sq ft) property.

The couple purchased the house in 2013 for €331,000: “It hadn’t been touched since the 1950s but I knew from the pitch of the roofline, and the fact that some neighbours had roof lights – that the pitch could allow a proper attic conversion – something which is a rarity with terraced houses in the Portobello area.”

Deciding that the kitchen should have a dining space, to allow for flexibility in the two interconnecting rooms to the front of the property, Meagher dropped the hall level to allow for higher ceilings, and installed a bay window in the extension which now accommodates that dining area.

“It works really well, as the whole place opens up for parties, but the middle room [that would normally be the dining room in these houses] can be used as a playroom – which it is now – but we thought when the kids were in their teens, they could use this space as their den.”

Deciding to keep the main bedroom as it was – one large room spanning the full width of the house – as the couple had lived in “tiny places in New York”, they converted the attic into a proper bedroom, which is compliant with necessary attic conversion regulations. To do this the builder had to drop the ceiling below by a foot, in order to comply with height requirements.

The couple changed what was the third bedroom on the return into a large family bathroom and this now houses the utility and has lots of storage space.

The decor of the house is lovely; a mixture of mid-century furniture and lots of paintings by Cian – who was an architect before he turned his hand to art – against neutral backdrops and the industrial vibe in the extension.

The couple have their eye on another renovation project and are staying in the area, as they love the atmosphere and convenience of the Portobello district.

Their home, with a greatly improved energy rating of B3, is now on the market through Sherry FitzGerald seeking €875,000.