Is it time for a change from identikit, fitted kitchens? Maverick designer Johnny Grey’s manifesto is to make the kitchen a room that reflects the personality of the whole home 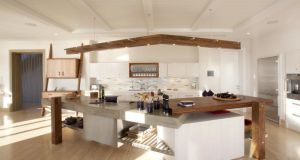 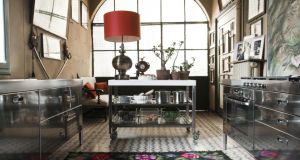 The Alpes Inox style includes stainless steel drawers and fridge unit, and a cast-iron fridge from The Conran Shop. conranshop.co.uk 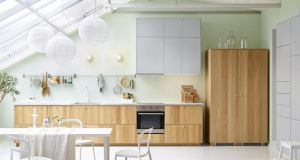 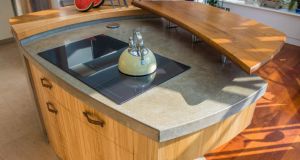 This triangular-shaped design by Johnny Grey includes an island, a counter top and a place to perch 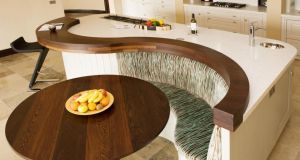 This design includes a curved island that incorporates a dining booth and is availalbe from Creative Wood Kitchens, Westport, Co Mayo (creativewood.ie) 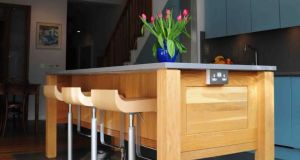 The focus in this Wabi-Sabi kitchen is on the chunky, solid oak counter-height table rather than the bank of duck egg blue units that fill the wall space behind. wabi-sabi.ie 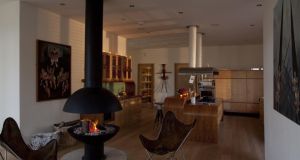 This design in Co Limerick by Johnny Grey is the kitchen as modern cave where the family can gather round the fire, cook and socialise all within the same space

Say goodbye to the bog standard kitchen and hello to a fun space that doesn’t feel detached from the look of the rest of your home. Maverick architect and designer Johnny Grey has been pioneering the idea of the unfitted kitchen since the 1980s, when he honed his skills working with British kitchen manufacturer Smallbone of Devizes. One of his first projects was for his maternal aunt, the acclaimed British cookery writer and mother of modern cooking, Elizabeth David, who has inspired generations of chefs from Ken Hom and Rick Stein to Jamie Oliver and our own Darina Allen.

Grey says the kitchen industry produces unchallenging designs. In his role as Visiting Professor of Design and Kitchen Culture at Buckinghamshire New University, he’s keen to forge links between the kitchen industry, design professions and third-level education and has helped to set up the first kitchen design course to degree level with the college’s School of Design, Craft and Visual Arts. He has also written several books on the subject.

Grey believes that the new BBC Two series The Kitchen shows the room’s new relaxed function in the life of ordinary families. Made by the people who produced Gogglebox, it follows meal times in eight households and Grey is heartened by what he sees.

“Ever since we lived in caves, the kitchen has been a social space but the way the fitted kitchen is designed prevents us from using the room in a relaxed way,” he says.

This ethos is well illustrated in one of his designs in a house in Co Limerick. A Grey kitchen is loose around the edges but has a hard core middle, an island or peninsula that is essential to connect the cook with his or her family.

In this sociable set-up we are obeying our instincts by maintaining eye contact with others in the room, he explains. “Turning our back on them to cook on a hob or wash up triggers our flight-or-fight alert system and stresses us unnecessarily. Instead the hob and/or sink should be situated in the hard core part of the kitchen, at the centre of the space.”

Grey wants to see an end to uniformity. A fan of curved lines, his unfitted kitchen offers a more relaxed attitude. A Grey kitchen will cost upwards of €50,000 to install but by taking on board some of his advice you can create an unfitted design of your own for far less. His first design featured a pole from an old wardrobe, hooks in the ceiling from which to hang pots, an old pine dresser and a free-standing island that “brought the place together”.

To emulate his ethos you need to consider the architecture of your home.

“Corners define a space. If you block them out with cabinetry then you lose the sense of a room. Keep at least two corners free at floor and ceiling junctions.” A walk-in pantry in a corner is one way to solve this dilemma. Its storage capacity will remove the need to have metres of cupboard space.

He believes you don’t need more than four feet of countertop for chopping and cooking. After you factor in height and work surface requirements, the rest of the kitchen is what he calls “a flexible concept”. He dismisses the idea of the kitchen work triangle because most of us never just have three things to do.

Instead he believes in what he calls soft geometry, preferring to triangulate the shape of his central island so that there is room for several friends and family members to “perch” while the cook cooks. This set-up also means the cook can enlist the perchers to help prep and chop.

Grey also likes open shelving, where you can show off pots, pans and utensils that are in regular use. In his own home he has durable and well-made pots on show. He also likes to give salad bowls, usually handmade pottery pieces that are not ornaments but meant for use as gifts at Christmas.

Pyrolave is a durable and hygienic enamelled volcanic rock surface that he is fond of using for countertops. Also instead of traditional pull-down fronted dishwashers he prefers dishwasher drawers.

Washing machines and tumble driers should be banned from the kitchen because of their ambient noise levels. His designs offer creative solutions to common conundrums. Instead of a free-standing knife block cluttering up a countertop, he inserts the block into the island and makes a feature of it.

In a medieval listed building, Grey installed a “light dresser” in a room with very little natural light. This was a dresser-shaped light box made using Corian that had strips of LED lighting, so that the piece of furniture had multiple uses. It acts as a storage unit, but also illuminates the room. The lights can also change colour to alter the mood of the room when the owners are entertaining.

For the gadget junkie, Grey has invented a cupboard that he calls an appliance garage. In one home this is an ovoid free-standing piece of personality-laden furniture that has shelving coated in a thin veneer of marble with space for a toaster and coffee maker.

Grey also believes in offering the kind of decorative finishes in kitchens usually reserved for formal reception rooms. Many of his designs showcase the work of artisan tiler Alex Zdankowicz, a trained ceramic artist who makes and fits the tiles himself, to add an ornamental element to the traditionally functional splashback. One recent kitchen has aluminium leaf laid upon a colour to add texture and an aged finish above the counter cabinets. Ultimately a kitchen is not about cabinetry but environment, he says. “Where possible a kitchen should have a view and access to the outside, ideally via French doors.”

Grey is currently analysing research conducted by the London School of Economics which assessed what made people happy. It found that people were happiest between 6pm and 10pm, which, he concludes, is when most are in the pub or the kitchen.

“In modern life the kitchen is where the family gathers to talk. The longer the kitchen can be a place that can hold people, where they can communicate together, the better we are at listening to our instincts and creating a space that will feel more relaxed, a place where people will want to linger.” That includes working on a tablet, laptop or smartphone or watching a TV programme while trawling twitter. This, he says, should no longer be considered anti-social behaviour. johnnygrey.com, alexzdankowicz.co.uk

Blended living In this open floor layout the Ikea kitchen blends into the living room. All the standard kitchen functions have been made to look as much like furniture as possible. Using Method units, which start from €29 for a wall cabinet, the pictured kitchen, including units, panels, sink, tap and worktops, costs €3,664. This price excludes appliances. ikea.ie

Cool metal The Alpes Inox includes, left to right, a stainless steel two deep drawer and fridge unit, cast iron fridge, 90cm oven, about €12,142, a Corian-topped trolley on wheels, about €4,978, and a five-ring hob cooker, 90cm oven and drawers unit, about €16,005, from The Conran Shop. conranshop.co.uk

Counter culture Wabi Sabi’s (087-2360044 wabi-sabi.ie) Patrick McKenna honed his aesthetic and project management skills while rebuilding housing in post-earthquake Kobe, Japan. The focus in this kitchen is on the chunky, solid oak counter-height table rather than the bank of duck egg blue units that fill the wall space behind. The quartz countered design costs about €17,000. wabi-sabi.ie

Curves rule Curves rule at Creative Wood Kitchens, Westport, Co Mayo (098- 28176 creativewood.ie) where they are up for an All Ireland Kitchen award for a design similar to this hand-built one. It includes a curved island that incorporates a dining booth and costs about €30,000.