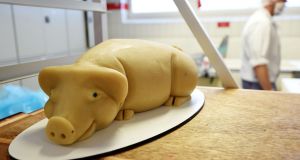 Image of the week: Marzipan woes

For many, it’s merely that intriguing layer between the icing of a cake and the cake proper, but in Germany, no Christmas is apparently complete without full-on marzipan treats made from sugar and crushed almonds, typically handcrafted, but increasingly the product of a 3D-printer.

Anyone for the massive marzipan pig being made here at the headquarters of JG Niederegger (founded 1806) in Lübeck, the “spiritual home” of marzipan?

Sadly, while the tradition of consuming the delicacy dates back to the 15th century, the family-run companies that kept this corner of the confectionary market sweet for so long have been under pressure in recent years as a result of spikes in the price of almonds – which tends to happen after droughts in almond-producing California – and some of have gone out of business.

In numbers: A yacht is a lot

Cost of all the luxury items mentioned in Santa Baby, the 1953 Christmas classic originally sung by Eartha Kitt (excluding a deed to a platinum mine, which would be more than €300 million), according to wealth management company Charles Stanley.

Average sum that Irish households will spend in shops in December, says trade body Retail Ireland. This will be up 2.6 per cent more on last Christmas and is about €870 more than household spending in any other month of the year.

Retail price of Hasbro’s FurReal Roarin’ Tyler the Playful Tiger at Smyths Toys, which predicted in October that it would be the top-selling toy this Christmas.

“Engagement bait” is the term given to social media posts that beg for likes, tags, comments and shares, increasing the chances of the post being inflicted upon all of us. Facebook has signalled a crackdown, which should sound a merciful blow to some of the most mind-numbing content that does the rounds on its platform.

The algorithm changes will, for example, mean that pages that repeatedly invite people to share an advertisement with multiple friends (thanks a lot, friend) to be in with a chance to win a prize – or whatever fresh hell it is promising – will see “significant drops” in reach. Facebook says it is trying to scale its efforts to reduce engagement bait. Soon, with any luck, posting things like “girls who deserve a holiday/treat/break…” followed by a list of 20 highly popular girls’ names will result in instant banishment from the internet.

Getting to know: Ajit Pai

Ajit Pai is the chairman of the Federal Communications Commission (FCC), the US’s communications regulator, and he’s “profoundly unworthy to wield a lightsaber”, according to Star Wars actor Mark Hamill. “A Jedi acts selflessly for the common man NOT to enrich giant corporations,” Hamill tweeted after the Republican lawyer made a cringe-making video in which he dressed as Santa Claus and took a swing with a lightsaber in celebration (as he saw it) of the FCC’s repeal of net neutrality.

It’s feared that the abolition of internet rules introduced by the Obama administration in 2015 will see cable and telecoms companies creating internet “fast lanes” for some websites and slowing down or blocking content from others. “It is not going to kill democracy,” responded Pai, who was picked for the FCC role by Donald Trump, who possibly might.

Confirmation from no lower an authority than the European Court of Justice that Uber is a transport company, and not the mere software provider it argued itself to be, has sealed an, ahem, difficult year for the company dubbed “the worst” in Silicon Valley. Here are just some of its lowlights for 2017.

1. #DeleteUber: The hashtag trended in January after Uber was accused of trying to exploit a one-hour airport strike that had been called by the New York taxi industry to protest Donald Trump’s travel ban.

2. Sexual harassment: A blog post by engineer Susan Fowler (later named the FT’s person of the year) sparked an investigation into a culture of sexual harassment across the company. Later in the year, 20 employees were sacked and many more were reprimanded or placed under review.

3. “Greyball” investigation: A criminal investigation was launched into Uber’s “Greyball” software, a “creepy” tool it had used to prevent law enforcement officials in some cities from hailing rides.

4. CEO’s fall from grace: By June, investors were calling for the head of chief executive Travis Kalanick. His year had included being filmed swearing at an Uber driver that he had to “take responsibility for his own s**t”.

5. London ruling: Transport for London denied Uber its request for a new licence, saying it wasn’t “fit and proper” to operate in the city. It is appalling. Sorry, it is appealing.