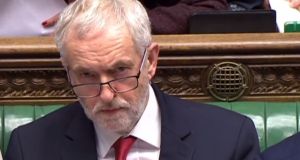 Corbyn came under fire from the Liberal Democrats after he dismissed the idea of a second referendum.

Jeremy Corbyn is facing calls for Labour to combine with other opposition parties to keep Britain in the EU single market and the customs union.

The SNP’s leader at Westminster, Ian Blackford, has issued an appeal for cross-party co-operation to prevent the “catastrophic damage” of an “extreme” Brexit.

His intervention came as Mr Corbyn rejected calls for a second referendum once the terms of a Brexit deal are known.

Mr Blackford said he would be inviting other opposition leaders to a summit on January 8th when MPs return to Westminster after the Christmas recess.

“Extreme Tory Brexit plans to drag Scotland and the UK out of the single market would cause catastrophic damage to the economy, costing hundreds of thousands of jobs, and hitting people’s incomes, livelihoods and living standards for decades to come,” he said.

“It is time for MPs of all parties to put politics aside and work together, in the national interest, to protect our place in the single market and customs union.

“As we saw with the successful amendments to the EU Withdrawal Bill, when opposition parties work together effectively it is possible to secure a parliamentary majority and deliver change in the national interest.”

Mr Corbyn came under fire from the Liberal Democrats after he dismissed the idea of a second referendum once the outcome of the Brexit negotiations is known.

“Our position is that we are not advocating a second referendum,” he said.

“We have had a referendum which came to a decision. The negotiations are still ongoing, albeit well behind schedule, and we’ve set out the kind of relationship we want to have with Europe in the future.”

Lib Dem Brexit spokesman Tom Brake accused the Labour leadership of having “shirked their responsibility” to provide effective opposition to the Government.

“The Labour leadership has constantly played a game of smoke and mirrors over their Brexit position. But here they are nailing their colours to the mast in support of hard Brexit.

“The party of opposition has again shirked their responsibility to oppose Theresa May’s Government. The public need to be given a say on the final Brexit deal.”

Meanwhile, the Government dismissed claims that Brexit Secretary David Davis was being sidelined in the negotiations with the EU.

The Times cited “senior figures in Brussels” as saying that Oliver Robbins played an increasingly influential role after leaving his role as Department for Exiting the European Union permanent secretary to become Prime Minister Theresa May’s EU adviser in the Cabinet Office.

A Government spokeswoman said: “This characterisation of the negotiations is wholly and wilfully inaccurate.

“The Brexit Secretary meets with his counterpart Michel Barnier at regular intervals to oversee the negotiations.

“In November they agreed their officials would maintain a constant dialogue so it should be of no surprise that senior British civil servants press the UK’s case as set by the Prime Minister and Brexit Secretary.” -PA