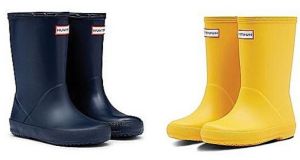 Since Hunter wellies got fashion traction the range of colour and styles has increased.

It’s a fair bet that whatever the outrageous clothes at this weekend’s Electric Picnic the footwear of choice for many will be sensible Hunter wellington boots.

When model Kate Moss was spotted at Glastonbury in 2005 in a pair of Hunter wellies and cut-off denims she created the quintessential and most copied festival look while also transforming the image of the workaday wellington into a lifestyle brand.

The invention of vulcanised rubber caused a rush to manufacture as creative applications for the exciting new material were explored. In 1856 Henry Lee Norris, and Spencer Thomas Parmelee arrived in Scotland from the US to use Charles Goodyear’s patented rubber to make galoshes and work boots. They called their company the North British Rubber Company and their success was boosted during the first and second World Wars and the company won army contracts.

After the wars with so many men and women now used to wearing wellingtons they became ubiquitous footwear. It wasn’t until 100 years later (and many company name and ownership changes) that the first distinctive olive green boot under the Hunter name was produced. It took a while to catch on being more expensive than the usual black wellingtons and when it did it was by upper middle-class British country types earning them the shorthand of “the green welly brigade”.

Since Hunter wellies got fashion traction the range of colour and styles has increased with designers such as Jimmy Choo creating cat walk versions.