Sea views don’t come much better than this in Sandycove for €2.75m 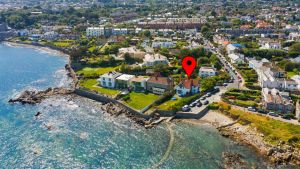 The location of an Arts and Crafts house on the seafront in Sandycove, Co Dublin, is pretty much its biggest selling point: Carrig na Chattan’s garden runs down to a wall above rocks by the sea, and there are clear views across Dublin Bay from here and from the property’s interior.

Anyone who has visited the Joyce Tower will recognise it as the house facing them at the bottom of the road that leads downhill from the tower. Built in 1903, reputedly for a relative of playwright George Bernard Shaw, Carrig na Chattan, a 204sq m (2,200sq ft) five-bed, is for sale for €2.75 million through Lisney.

This is an executor sale, and the house will need considerable work to renovate it: the punchy price reflects the fact that it’s one of very few shorefront properties in Sandycove. It’s also a protected structure, an Arts and Crafts Edwardian with the small leaded windows typical of its period: new owners will need a clever architect to come up with a suitable design. It has been rented for the past few years.

The front door of Carrig na Chattan is on Mornington Avenue, a short road at the bottom of Sandycove Avenue East with just three houses on it. A wrought-iron railing opens into a part-lawned, part-gravelled front garden. The front door opens into a small porch with a quarry-tiled floor and from there into a wide front hall with an open brick fireplace.

The house has an unusual layout: there’s a lounge/diningroom on the left of the hall with a bay window at the side looking towards the tower, and a window looking into the front garden. The modern kitchen/breakfastroom on the opposite side of the hall at the front of the house looks as if it was recently installed: it has grey units, a brick-tiled splashback and a polished granite-topped island unit. A utilityroom and a pantry open off it.

An L-shaped drawingroom at the back of the house is dual aspect, with a large bay window looking out to the sea.

A door at the back of the hall opens into another small quarry-tiled porch with three arched openings: it opens into the 110ft-long lawn which leads down to a small semi-circular wall looking over rocks to the sea. It’s more private than it might appear, given its location beside a slipway down to the sea popular with locals and visitors: it has fairly high bushes on either side of the garden providing privacy.

A wide staircase with handsome timber banisters leads up to a half-landing off which is a toilet and separate shower room and a bedroom. There are four more bedrooms on the top floor, three of which have windows facing both up towards the Joyce Tower and straight out to sea.

The house has on-street parking.

It’s not clear if there is a direct connection between Carrig na Chattan and Shaw, but the Shaw name is connected to the Scottish clan Chattan.

What sold for about €355k in Chapelizod, D9, Blessington and Stoneybatter

Talk of Halloween is a welcome distraction but how will it work this year?
8