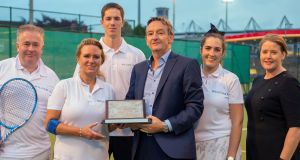 Notable mention must go to three players who have featured – they might even say dominated – almost every year since the tournament’s inception: David Cantwell and Ken MacDonald, both of Hooke & MacDonald, and Simon Ensor, of Sherry FitzGerald. Both companies featured in that first final, back in 1989, and have slugged it out every year since. Cantwell recalls missing only one event.

From small beginnings as a friendly annual competition among chartered estate agents, the tournament has grown to include a wider mix of professionals from the sector. Hooke & MacDonald was the only agency to make it to this year’s semi-final round, where it, and The Irish Times, were seen off by teams from the property website MyHome and the law firm William Fry. In the end William Fry emerged triumphant over MyHome. It seems the solicitors’ court expertise may just have given them the advantage.