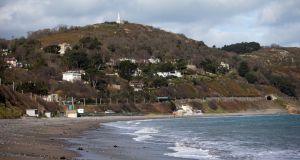 Killiney, the millionaire’s playground 9½ miles south of Dublin city centre, is often described as Ireland’s Amalfi coast for a reason. With dramatic sweeping views of Dublin to the north, the mountains of Wales to the east (on a good day) and the Wicklow Mountains to the south, you’re rarely short a decent view. And a good beach means that swimming, sailing and dog walking opportunities abound.

Regular swimmers are drawn to the White Rock bathing place below the Dart line, and a workout can be rounded off by climbing the Cat’s Ladder, a steep set of granite steps leading up from the Vico Road to Killiney Hill Park with its numerous pathways, obelisks, lookouts, playground and cafe.

Killiney was a desirable seaside summer retreat for the very wealthy in the 19th century, and not much has changed on that front. Several celebrities, among them Enya and Bono, have made the sleepy coastal neighbourhood their home. Killiney is packed with listed/protected structures, and different types of architecture, from Georgian and Victoria to Gothic-revival and modern.

The surroundings offer plenty of privacy and tranquility at a price, and despite being on the fringes of the city, the Dart will get you into town in 45 minutes, while Dublin Airport is also around 40 minutes by car.

All of that is on the sea side of Killiney, but the area has a large hinterland that touches on Shankill to the south, Ballybrack and Loughlinstown to the southwest, and Glenageary to the west. and it’s here that more affordable homes are to be found.

Killiney doesn’t have its own centre, though the Druid’s Chair pub would be considered by some to be a centre. There are shops in nearby Ballybrack, and pubs and cafes in Dalkey village.

The lack of a centre gives Killiney’s leafy roads a dormitory feel, while some pockets can feel isolated. Narrow or nonexistent footpaths and inadequate street lighting on some of its major roads can be off-putting for pedestrians, and twisting side roads add to the commute time, Although a number of roads in Killiney are zoned to help control traffic, the relatively recent installation of ramps can be a bit of a bugbear for locals, as they can affect the enjoyment of cycling and driving in the area.

Prepare to be very nice to your bank manager… €545,000 will buy you a nicely sized three-bed, two bath at Wanford Close, close to St Joseph of Cluny, Killiney secondary school (via Sherry Fitzgerald Dalkey).

A first-time buyer might find much to like at Furze Cottage on Glenalua Road, a steep but pretty road with a hidden away feel (€375,000, via Sherry Fitzgerald Dalkey). With one bedroom and one bathroom, it’s short on space and needs work but the semi-detached cottage is well located and in pretty good condition inside.

Meanwhile, Arlburg on the Ballinclea Road certainly boasts the wow factor (€1.1 million, via Hunters). With five bedrooms, four bathrooms and grounds totalling about a third of an acre, the detached home is near Killiney shopping centre and the Graduate Pub. Killiney has plenty of trophy homes for sale – think rolling gardens and sea view from most windows. Summerhill, on Marino Avenue West is a classic example with its mellow pink exterior, five acre grounds and seven bedrooms (€8.9 million, via Lisney).

Killiney has a pretty settled population that tend to stick around long term, but the occasional rental property pops up from time to time. A three-bedroom apartment (for example, in Killiney Towers) could set you back about €2,100 a month, while a four-bed showstopper on Killiney Hill Road was recently seen listed at €4,950 a month.

Within Killiney proper, try The Druid’s Chair (Killiney Hill Road) for al fresco cocktails, and Mapas at Fitzpatrick Castle Hotel) for some upscale casual eats. The Igo Inn (Military Road, Killiney) is a friendly and welcoming pub in nearby Ballybrack village that’s very much worth the short walk. Dalkey has a host of fantastic eateries and pubs too, among them The Queens (12 Castle Street), Finnegan’s (1 Sorrento Road) Ouzos Steak & Seafood (22 Castle Street), and 1909 Restaurant and Wine Bar (31 Castle Street).

All that fresh sea air and outdoor activities are perfect for little ones, and there is a wealth of great schools in the area, for girls at least.

The Dart is a reliable bet if you want to get there within 45 minutes from Dublin’s city centre, while Dublin Bus’s 59 route (from Dun Laoghaire) covers much of the immediate area. An Aircoach serves Killiney and Dalkey to and from Dublin Airport.

“As suburbs go Killiney has a lot to offer, and it’s hard not to be at one with nature here. I’m lucky to live on the edge of Killiney Hill Park, which offers acres of parkland with wooded areas. The Obelisk is a worthy attraction and worth visiting when it is open to the public to enjoy the views from the top. I live an 8 minute walk from the beach, and never tire of the sunrises you get living close to the sea.

“Sadly the Killiney Stores closed last year, but there are lots of other businesses close by. There is a lovely community spirit here and so much history to enjoy. I don’t think I could ever leave the sea, the beauty and inspiration from nature so close to the city.” – Avril Murphy Allen, interior designer (avrilmurphyallen.com)

Do you live in Sallynoggin? If so, please tell us what it’s like to live there. Do you have a favourite place or a pet peeve in the neighbourhood?