Cheaper than a greenhouse and easier to put up, a polytunnel takes your gardening to a new level 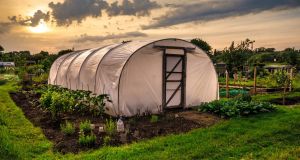 Sheltered beneath that all-important protective skin of glass or polythene sheeting, plants enjoy a modified microclimate that facilitates growth.

If you’re the proud owner of a polytunnel or glasshouse, then you’ll already know that undercover gardening marches to the beat of a very different drum.

Sheltered beneath that all-important protective skin of glass or polythene sheeting, plants enjoy a modified microclimate that extends the growing season at both ends, allowing them to burst into growth much earlier and to stay in growth for longer and more easily than those outdoors.

That same benign microclimate also protects the soil from the worst of winter’s harsh weather, which in turn encourages the increased activity of the many beneficial soil microorganisms essential to healthy, vigorous growth.

In fact, such is the difference it makes to growing conditions that signs of spring have already appeared in most Irish polytunnels and glasshouses, meaning it’s time to start readying them for another growing year.

Begin by choosing a dry, still, relatively mild day to fling open the doors and start clearing away dead or diseased vegetation, weeds and general debris.

The structure itself also needs to be cleaned thoroughly, along with doors, vents and general fittings such as gutters, shelving, staging and water butts.

Not only does this help to maximise the amount of light reaching your plants but it also reduces the threat of overwintering pests and diseases. For best results, use a long-handled soft brush, an old sponge and a bucket of warm, soapy water (ideally an environmentally safe washing-up liquid such as Ecover) to remove algae and accumulated dirt.

Rope in a willing helper to clean the hard-to-reach upper, outer roof of your tunnel by using a couple of old sheets tied together and dipped in warm, soapy water. Just sling one end gently over the top and down the other side and then pull the sheets gently back and forth (each person holding onto one end), slowly working your way along the length of the structure.

Alternatively, use a soft brush fixed to a telescopic handle or to a length of garden hose. Then hose down with clean water before thoroughly washing the inside, taking extra care to clean out any creases/ folds in the polythene cover where pests/ diseases could be lurking.

This is also the time to remove any overhanging branches rubbing against the structure or which could cause damage in a storm. Check also for any small tears or holes on the plastic skin of a polytunnel, which can be patched with polytunnel repair tape (available from Cork-based Fruithill Farm, fruithillfarm.com) or for broken panes of glass on a glasshouse that need replacing.

Speaking of ventilation, if you were one of the many Irish gardeners who struggled to keep polytunnel/glasshouse crops happy during last year’s prolonged heatwave, then now is the time to consider retro-fitting additional ventilation.

Whether it’s the addition of extra roof and louvred side vents in a glasshouse or an extra door/netted gable-end opening/side ventilation to a polytunnel, this will make the all-important difference to keeping temperatures down on very hot, bright summer days.

For polytunnels, Offaly-based Polydome, or polydome.ie (who also sell glasshouses as Greenhouses Ireland, greenhouseireland.ie ) have designed an excellent new roll-up ventilation system that can be retrofitted to almost all models while Colm Warren Polytunnels (cwp.ie) can also retrofit additional ventilation to most designs.

But try to book them as soon as possible; most reputable firms already have lengthy lead-in times and waiting lists.

Don’t forget yet another painful gardening lesson of last summer’s prolonged drought, which is the importance of easy access to a source of clean water. If you haven’t already done so, then this is the time to install a rain-harvesting system on your glasshouse or polytunnel, bearing in mind that not only is harvested rainwater a free and sustainable means of watering plants but it’s also far better for them than tap-water from a main supply. Stockists include Lenehans (lenehans.ie) and Greenhouses Ireland.

This is also the time to get polytunnel and glasshouse beds prepped for sowing and planting in the coming months. As these are often intensively used to grow ‘greedy’ crops (examples include tomatoes, sweet corn, courgettes) that can quickly deplete the soil of nutrients, it’s vital to do everything you can to keep the latter in good heart.

Nothing beats homemade compost in terms of its beneficial effect on soil health, structure and fertility as well as on plant health, while well-rotted garden manure (my preference is for horse manure) is also marvellous, either spread as a mulch or lightly forked in.

If you can’t get your hands on a local source, then Gee-Up is a great alternative (geeup.ie ) while a generous sprinkle of powdered seaweed dust also helps to stimulate the activity of beneficial soil microorganisms and aid germination as well as healthy growth.

Last but not least, it’s time to stock up on bags of seed compost (Klasmann do one of the best peat-free versions), order seed of your favourite undercover crops, clean electric propagators, propagation trays, and pop old garden fleece in the washing machine.

And if you’re itching to start doing a little sowing and planting in your polytunnel or glasshouse?

While it’s best to hold off sowing seed of tender plants such as tomatoes, peppers, melons until mid-late February (sow indoors using a heated propagator and transplant in late spring), it’s not too early to start direct sowing seed of oriental salads such as mibuna, mizuna, and rocket.

You can also start sowing seed of broad beans, sugar peas (the variety  ‘Delikett’), turnips, spring lettuce, spinach, beetroot (‘Boltardy’), leeks and onions (sow these indoors with gentle heat, then move to a cool, very bright, frost-free spot once germinated and pricked out into modules) for transplanting out into your polytunnel/glasshouse from mid-February, as long as you’re willing to protect them with a few layers of fleece on very frosty nights.

Chillies and aubergines also do well from an early February sowing (sow indoors using a heated propagator and transplant in late spring).

You could even pot up some seed potatoes (suitable varieties include ‘Lady Christl’, ‘Duke of York’, ‘Charlotte’ and ‘Annabelle’) in two-litre pots, for transplanting into their final undercover positions in mid-February, as the expert Dublin-based organic polytunnel grower, gardener and blogger Nicky Kyle likes to do (nickykylegardening.com ).

You’ll also need to give these plants the extra protection of two layers of garden fleece on frosty nights, but that’s a small price to pay for having your own homegrown potatoes by Easter.

Careful crop rotation is essential in the kitchen garden, allotment and polytunnel in order to avoid the buildup of pests and diseases as well as the depletion of particular nutrients over time.

This is a great time of the year to sit down with a pen and paper and a rough drawing of your plot to plan your crop rotation in advance before the hectic rush of spring.

Blackcurrant bushes need to be pruned annually to prevent them from becoming overly large as well as less productive, so get them shipshape for the growing season by using a sharp secateurs or loppers to cut out roughly one-third of the stems (choose the oldest, thickest branches) along with any weak, spindly or damaged growth.

Finish off by weeding around the base of each plant and then cover the bare soil with a weed-suppressant, nourishing mulch of well-rotted manure or garden compost.

When bad weather prevents you from getting out into the garden, take the opportunity to tend to indoor plants. Start by removing dead and/or diseased leaves and faded flowers, then use a soft, damp cloth to wipe down dusty leaves.

If you spot signs of insect pest infestation, try washing it away by spraying the affected area with a couple of jets of clean, tepid water.

Failing that, try a homemade spray using a drop of washing-up liquid, a teaspoon of vegetable oil and four fluid ounces of warm water mixed together or spot-treat using a cotton bud dipped in surgical spirit.

Water when/ if required, bearing in mind that it’s important to avoid overwatering indoor plants at this time of year as most of them are not in active growth.

Support bubbles: Everything you need to know
8