Figs are in season: here’s how to grow your own

A fig tree will happily grow in a sunny spot, or in a polytunnel or greenhouse 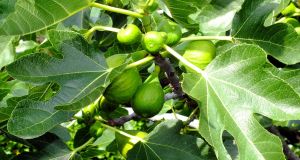 Fig tree: originating in Asia Minor, the culinary fig (Ficus carica) is one of the earliest species of fruit cultivated by humankind. Photograph: BSIP/Universal Images Group via Getty Images

Ever since childhood I’ve had something of a mild obsession with ripe, garden-grown figs, a fruit that seemed more the stuff of Victorian gardening books than reality.

Once as a young girl I was given a plump handful as a very special treat, each dusky-skinned, luscious fig sitting in its own small nest of crumpled newspaper to protect its delicate flesh from rough handling. Sweet, sticky, juicy and with a rich, almost decadent perfume all their own, they were memorably melt-in-the-mouth delicious.

No wonder the late, great food writer Elizabeth David wrote that eating ripe figs straight from the tree “in the very early morning when they have been barely touched by the sun, is one of the great pleasures of the Mediterranean”.

Originating in Asia Minor, the culinary fig (Ficus carica) is also one of the earliest species of fruit cultivated by humankind and not only for its sheer mouth-watering deliciousness.

The Roman philosopher Pliny mentions its health-giving qualities as does the Bible, while modern science confirms that the fig is so brimful of valuable nutrients that it very likely played a significant role in the evolution of the human race.

David’s remark, of course, also gives us a valuable clue as to the fig tree’s preferred growing conditions if it is to be properly productive in Ireland’s cool, damp climate.

The undeniable charms of its large, handsome architectural foliage aside, if you want it to fruit well in this country then this heat-loving, ultra long-lived, deciduous tree must be given a well-drained, not overly fertile soil and a very sheltered, sunny position against a south or west-facing wall in a warm garden. Failing that, it can be grown very successfully under cover of an unheated glasshouse or polytunnel.

In Ireland, it’s not unusual to see large, elderly fig trees growing in sheltered old walled gardens, venerable specimens that have reached a considerable height and spread over the years as a result of being left unpruned.

The Victorian and Edwardian gardeners that planted them almost certainly originally grew these trees as ‘fans’, using straight canes and horizontal wires to carefully train their young branches into a spreading, flattened fan-shape against warm garden walls, a useful, space-efficient way of providing maximum heat and sunshine to help them crop well.

To keep these fan-trained fig trees in good shape and encourage new lateral growth, any side shoots would have been lightly nipped back to a bud in spring and any dead, diseased or crossing branches removed along with about a quarter of the tree’s oldest branches.

In midsummer, these fan-trained trees would have been lightly pruned again, pinching out the growing tips of young shoots and removing any outward growing shoots or branches that might be shading the developing fruit and preventing it from ripening.

Netting the fruit against greedy birds was another must. Finally, in late autumn (late October- November), any unripened fruit would have been gently removed, leaving just the tiny, embryonic fruitlets produced in the leaf axils near the tips of the shoots (these are typically no more than the size of a pea) to grow on and ripen the following year.

The same gardeners that once lovingly tended these trees would have also known the fig tree need its roots to be restricted to prevent it from becoming too large, leafy and unfruitful. For that reason, they were often planted into open-based troughs in the ground (roughly 60-70cm square) that were fashioned from large paving stones.

In our much smaller modern gardens, a large tub, barrel or container (a minimum of 45cm in diameter and filled with a free draining John Innes No 3 compost lightened with horticultural grit for extra drainage) will achieve much the same result as regards root restriction with the added benefit of allowing you to move your fig tree/ bush under cover of a garden shed or garage during the winter months to protect it against harsh frosts.

If you have a conservatory or polytunnel then all the better as you can grow it under cover all year round, typically ensuring fruit from as early as July and as late as November in even cool, wetter than average summers/ autumns like this year’s.

Just make sure to keep it very well watered during the growing season (daily) and give it regular potash-rich liquid feeds until the fruit starts to ripen. Alternatively, if that undercover growing space is needed for other crops during the spring/summer months, then you can move your fig tree/bush outdoors after all risk of frost has passed before bringing it back under cover again in autumn.

Easily propagated from cuttings, of the many different varieties available the old reliable is Ficus ‘Brown Turkey’ which is particularly prized for its reliability rather than its flavour.

‘White Marseilles’, ‘Brunswick’ and the relatively compact ‘Dalmatie’ are also good choices for a very sunny, sheltered spot outdoors while ‘Rouge de Bordeaux’, ‘Violette de Dauphine’ and ‘Petite Negra’ are all varieties known for their very flavoursome fruit but best grown under at least partial cover in our cool climate. None require a pollinating partner to produce fruit.

While mid-spring is the best time to plant a fig tree, this is the time of year when the outdoor-grown autumn crop begins to ripen. Along with the ease with which it can be picked from the tree, signs of perfect ripeness include darkening of the skin, softness and slight splitting of the sweet, juicy flesh and the appearance of beads of sweet nectar at the base of the fruit.

If you can resist the overwhelming urge to scoff each one as soon as it ripens, figs are also delicious served with a cheese platter, tossed in a salad, baked with a drizzle of honey or dipped in chocolate. Whichever method you choose, you’ll always want more.

This Week in the Garden
Early autumn is an excellent time to sow seed of most species of hardy flowering annuals while the soil is still warm and moist, ensuring excellent rates of germination and rapid establishment of baby root systems.

You can either direct-sow seed outdoors into an open, sunny spot with weed-free, friable soil that’s been raked to a fine tilth to remove any large stones or garden debris or alternatively sow it into pots/trays/modules for pricking out later in the autumn as established seedlings get into their final growing position.

Most hardy annuals can be propagated either way but a few species do best from direct sowing (for example nigella/Love-in-a-mist). There are many benefits to sowing hardy annuals in early autumn rather than early spring: the resulting plants are much bigger, stronger, earlier to flower, more floriferous and longer flowering as well as more able to withstand adverse growing conditions.

Do this
Many plants are producing ripe, viable seed at this time of year which can be harvested and saved for use next year. As long as the parent plant isn’t an F1 hybrid, the resulting plants will breed true to the open-pollinated parent plants especially if it’s a species rather than a named variety.

Always try to save seed from the best plants – those that have proven themselves to be productive/floriferous, disease-resistant, vigorous – and do so on a dry, still day, labe;ling each lot of seed by placing it in a brown paper bag and then putting it somewhere under cover to gently dry.

Signs that seed is ripe and ready for collection include yellowing/brown seed pods, dark/hard seeds (as opposed to soft green, immature seeds). Once prepared and properly dried, store seed in the fridge at 5C in a labelled, zip-locked plastic bag that includes a silica gel pack. For further details, visit  seedsavers.org/how-to-save-seeds