Eight great plants and flowers for the May garden 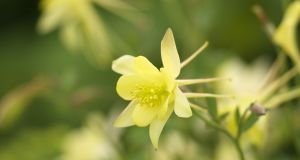 May has been described as that month of the year when everything seems possible. Yet it can be a funny time of the year in the flower garden with that first wonderful splurge of spring bulbs almost at an end while early summer-flowering species have yet to come into bloom. So here’s a look at some of the loveliest May flowering plants to help bridge that tricky gap …

Aquilegia: As a child I knew this long-lived, hardy herbaceous perennial as granny bonnet, while another of its common names is columbine. Its graceful flowers typically appear in May-June on tall, slender stems above neat mounds of lacy foliage and are also excellent as a cut-flower.

Aquilegias do best in dappled shade but will also grow happily in full sun if given a humus-rich, moisture retentive, free-draining soil. Plants are widely available in good garden centres but you can also easily grow them from seed sown at this time of year (seedaholic.com) . Once established, aquilegias will also generously self-seed in the garden (typical height and spread of 90cm x 45cm).

Known as the Wedding Cake tree or the Japanese snowball bush, Viburnum plicatum f. tomentosum is a deciduous shrub with elegant, creamy-white lacy flowerheads that appear along its branches in May.

Lovely when used as a focal shrub in a planting scheme, it will grow happily in sun or light shade and in an averagely fertile, moist but well-drained soil. The classic variety Mariesii (3m x 4m) is too large for smaller gardens. Instead seek out more upright, compact varieties such as Summer Snowflake (1.2m x 90cm) which flowers intermittently from May-October or ‘Kilimanjaro’ (3m x 1.5m).

Geums have become hugely fashionable in recent years with the introduction of a host of new, ultra long-flowering varieties with blooms in the prettiest of sorbet shades. Long-lived, hardy and tolerant of a wide range of growing conditions, this accommodating, pretty herbaceous perennial is happy in either full sun or partial shade and in a fertile, moist but free-draining soil.

Look out for sterile varieties such as Geum Cosmopolitan, whose fruity, deep peach-coloured flowers appear en-masse above slender stems, flowers from May-July. So do those of the apricot-flowered Mai Tai and the double yellow-flowering old cottage-garden favourite know as Lady Stratheden. Cut back plants after flowering to encourage a second, later flush of colour.

What is it about a lilac in full, scented bloom that makes us want to don straw boaters and re-read The Go-Between while sipping on Pimm’s iced tea... Classic varieties of this hardy deciduous, long-lived shrub such as the white-flowering Syringa Madame Lemoine and the purple-flowering Charles Joly will grow to a height and spread of 7m, making them suitable only for larger gardens.

Unlike their taller relatives, these new, compact varieties will also continue to flower intermittently from spring right through to autumn. Lilacs enjoy a fertile, free-draining, somewhat alkaline soil in full sun

The tiny fragrant flowers of wild violets can be found growing in woodlands at this time of year while their cultivated cousin, Viola cornuta (commonly known as the horned violet), makes a very pretty addition to the May garden.  This low- growing, semi-evergreen, versatile perennial is excellent for growing along the front of a border, beneath roses, or simply in a windowbox or container.

Hardy and floriferous, the horned violet needs a cool, humus-rich, moist but free-draining soil in full sun or partial shade. Keep regularly deadheaded and cut plants back hard after flowering to keep them neat. Typical height and spread of  20cm x 30cm.

Few small trees pack as powerful a punch as the Chinese dogwood, Cornus kousa var. chinensis, whose star-shaped, bee-friendly flowers appear in huge abundance in late May-June and are followed by ornamental scarlet fruits in autumn.

Bearded irises are another late spring/early summer flowering perennial whose star has risen in recent years with the rediscovery of a range of heritage cultivars originally introduced by the celebrated British plant breeder and artist Cedric Morris back in the 1940s and 1950s.

His Benton irises are prized for their subtle, smudged colours and gracefu, scented flowers; examples include the dusty-pink and cream Iris Benton Deirdre and the blue-purple Benton Nigel (available from specialist suppliers including bethchatto.co.uk). The Benton irises aside, other recommended varieties include the chocolate-gold flowering Quechee and the pale-blue Jane Phillips (camolinpottingshed.com).

These clump-forming, fully hardy perennials flower from May-June and need to be planted shallowly (with the rhizome sitting on the surface) in a light, very well-drained soil in full sun (they love a stone trough) to make them happy.

Sometimes we just fail to see the beauty right under our noses. Grown as a freestanding specimen, the common hawthorn (Crataegus monogyna) is a supremely garden-worthy small tree with multiple seasons of interest, not least of which are its pretty clouds of bee-friendly, scented flowers in May, a glorious annual display that’s earned it the common name of the may bush.

Tolerant of an extraordinary range of growing conditions including salt winds and air pollution, supremely hardy and very wildlife friendly, this native species (also known as the fairy tree) is an underappreciated gem.

This is a great time of the year to sow seed of heat-loving vegetables such as pumpkins, squash, courgettes, French beans and runner beans into small pots filled with a damp, good-quality seed compost. Placed somewhere bright and warm such as a sunny windowsill, porch, glasshouse or polytunnel, the seed should germinate quickly. Bear in mind that these sorts of heat-loving crops should not be planted out in the garden until the soil has fully warmed up and all risk of frost has passed, which is typically late May/early June. In the meantime, young plants should be kept well-watered and will benefit from an occasional liquid seaweed feed.

Slugs can do a huge amount of damage to young seedlings, transplants and the soft, new shoots of established plants at this time of year, even those being grown in glasshouses and polytunnels. It can be tempting to try to control them using slug pellets but bear in mind that conventional metaldehyde-based pellets are extremely harmful to wildlife and pets while even the organically-acceptable kinds are damaging to soil health and earthworm populations when used regularly.

Instead control them by employing a mix of time-honoured techniques including practicing good garden hygiene, snipping them in half with a sharp secateurs for the birds to eat; keeping beds weed-free so that birds, hedgehogs and other natural predators can more easily pick them out; lightly hoeing the soil to expose slug eggs to sunlight and using beer traps.

If you’re raising flowering annuals or tender bedding plants under cover for transplanting out in late May/early June, bear in mind that many (but not all) of the most popular kinds benefit from having their soft growing tips “pinched out”, a simple process of using your index finger and thumb to remove the top of the growing stem to just above a set of leaves.

This encourages the production of side-shoots, resulting  in a much bushier, more floriferous plant.  Species that benefit from pinching-out include cosmos, spring-sown sweet pea, zinnia, fuchsia, amaranthus, calendula and dahlia.

Until the end of September, the Bothy, Victorian Working Garden, Fota House & Gardens, Fota, Co Cork, an exhibition on the life and times of Fota’s former head gardener William Beswick, who was killed in action in WW1, admission free, see fotaframeyardblog.wordpress.com for opening hours.