Cocoon yourself in D7 house on the hill for €450k 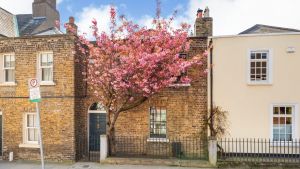 Montpellier Hill is a little side street parallel to the hub of Conyngham Road that connects historic Arbour Hill to Infirmary Road with its access points to the Phoenix Park.

The location is spot-on. It is about a seven-minute walk to the Museum stop on the Luas red line and about the same distance to Heuston Station where there are also intercity and commuter trains. The terminus of the crosstown 46a bus is on Infirmary Road.

The late-19th century property has been tastefully decorated by its current owner, who has painted the walls in deep, restful shades of greens, blues and fawn, creating a cocooning sense from the narrow hall and into the livingroom, set to the front. This room has exposed brick detailing and a cast-iron fire surround matching the one in the diningroom, to the rear and accessed via interconnecting glass-panelled doors. There are freestanding book and display units in both rooms and, from the diningroom, where there is a large table big enough to fit eight to 10 people, there are sliding doors that open out to the southwest-facing back.

The garden is set out over three separate stepped levels. You could extend across the level nearest the house without losing a huge amount of space

The kitchen is small, really galley-sized, designed to accommodate the circular spiral stairs that have replaced the original timber design. While rickety to climb, it is very charming visually.

Upstairs there are three bedrooms. All have exposed stone walls that appear to be finished in a lime render, and original timber floorboards.

The master, to the rear, is a good-size room, overlooks the garden and has an open fire where a gas insert could be a lovely touch, especially on winter mornings.

The other two bedrooms are to the front and feel sequestered away thanks to a separate corridor linking them to the small landing, meaning you could rent one and retain good levels of privacy. But, while charming, there is a lack of built-in storage and/or wardrobes and just one bathroom – a shower room upstairs that is painted a rich teal blue.

The interior is charming but it is its exterior that will really sell this house. The garden is set out over three separate stepped levels. You could extend across the level nearest the house without losing a huge amount of space, and this would help give you a sizeable kitchen and bring in more of the lovely light this orientation offers.

The garden is extremely private, only overshadowed by the neighbours’ extensions at the top tier level.