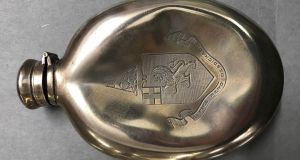 The silver brandy flask given to a first-class passenger shortly before he drowned on the Titanic. Photograph: Henry Aldridge and Son Ltd/PA wire

A silver brandy flask given to a first-class passenger shortly before he drowned on the Titanic has sold for £76,000 (€88,136) at auction.

Helen Churchill Candee brought the flask, engraved with her family’s motto “Faithful but Unfortunate”, on board the liner.

As the ship was sinking, she handed her cherished family heirloom to friend and fellow first-class passenger Edward Kent.

Mrs Churchill Candee told him: “You stand a better chance of living than I.”

Mr Kent was one of more than 1,500 passengers and crew who died when the Titanic struck an iceberg in the early hours of April 15th, 1912.

His body was later recovered, with the flask among the items sent back to his wife.

Mrs Churchill Candee survived and received the flask from Mr Kent’s sister Charlotte, along with a letter of explanation.

This described how the flask was “badly out of shape” following the sinking.

The flask was originally sold in September 2005 and was up for auction at Henry Aldridge & Son in Devizes, Wiltshire, UK, on Saturday.

Mr Aldridge described the flask as “one of the most powerful and emotive three-dimensional objects from the Titanic ever offered for auction”.

“It is an incredibly powerful and poignant piece,” he said.

“The damage on it illustrates graphically the horrendous pressure involved when the ship sunk and certainly points to it being submerged at a fairly significant depth.

“It is a completely unique object with an incredible provenance which enables us to track its history back to April 15th 1912.”

She boarded the Titanic to return to the United States as her son had been injured in an air-crash.

Her story was recounted in the 1958 film A Night to Remember.

“It is believed by some to have been one of the inspirations for the lead character Rose in James Cameron’s blockbuster Titanic,” Mr Aldridge said.

“The flask itself bears the scars inflicted by Titanic’s death throes.”

Both the flask and letter were on show at the world’s largest Titanic museum, located in the United States, since January.–Additional reporting: PA