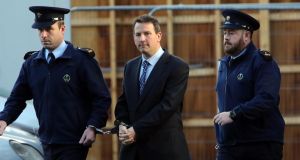 Graham Dwyer was convicted of the murder of the childcare worker Elaine O’Hara. Photograph: Collins Courts

The former south Dublin home of the convicted murderer Graham Dwyer has been put up for sale. The architect’s three-bedroom house, at the end of a tree-lined cul-de-sac off Kerrymount Avenue in Foxrock, has been placed on the market for €595,000.

Dwyer was arrested at the house on October 17th, 2013, and has remained in custody since then. He is serving a life sentence in the Midlands Prison after being convicted, in 2015, of the murder of the 36-year-old childcare worker Elaine O’Hara, in 2012.

Dwyer is appealing his conviction, although this remains on hold pending a Supreme Court judgment concerning the State’s appeal of a High Court finding on its data-retention laws. Dwyer is arguing that data gathered from his phone should not have been used at his trial; it played a key part in his conviction.

In what its selling agent described as a bank sale, 6 Kerrymount Close was placed on the market through the Wyse estate agency on Monday afternoon. The selling agent, Liam Quain, said viewings will take place by appointment only.

The modern, 159sq m detached house with private rear garden has been vacant in recent years. The price is about 10 per cent below the typical asking price for properties in this area, where houses can command between €650,000 and €700,000. Recently a similar property, although slightly smaller and in need of substantial upgrade, at nearby Kerrymount Mall was put up for sale for €595,000 and went sale agreed for about €670,000.

The downstairs area of Dwyer’s former home comprises an entrance hall, guest toilet, sitting room, kitchen, dining room and living room. Upstairs are the three bedrooms, including a main bedroom suite with walk-in wardrobe and en-suite bathroom. Kerrymount Close is close to the N11 between Foxrock and Cabinteely villages.

Paddy Holohan: ‘MMA was a liferaft to grab onto’
5

Time to plant perennials – but choose flowers that get along
10