Priced out of Dublin 8? Try Chapelizod

By the Phoenix Park and straddling the Liffey, this village has an out of the way feel 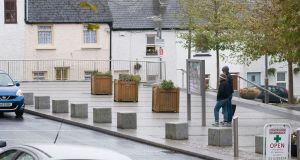 The main square in Chapelizod. The area feels more like Co Dublin than the city. Photograph: Dave Meehan

Chapelizod has the very unusual distinction of being a Dublin village that is located on both the north and south sides of the river Liffey. Located 7km from the city centre, Chapelizod village is largely based on the north of the city – where its town square and approach to and from the city are located, but crossing Chapelizod Bridge also leads on to another stretch, which runs up Chapelizod Hill Road and Lucan Road.

The village dates back to Anglo-Norman times, with an influx of Huguenot settlers in the 17th century. The town was always – and still remains – a part of Dublin city that is set apart from the more urbanised areas.

Set in the wooded valley of the Liffey, the town feels more like Co Dublin than the city and is an ideal spot for daytrippers looking to escape the city for a quiet lunch or drink, or potential homeowners looking for a bucolic-style life, while still within easy reach of the hubbub of Dublin town, and also with a significantly lower price tag than areas such as The Liberties.

Homes in the area range from period Victorians, dating from the 1890s, through to newer builds from the 1970s and a number of apartment complexes, which came into being during the Celtic Tiger.

“There is a 50-50 split of houses and apartments for sale,” says James McKeon, associate director of DNG Lucan. “In terms of apartments, there are a number of developments, including the Island, the Weir and Knockmaree. These are selling well in recent years as current owners are coming out of negative equity and placing the properties on the market again, with owner-occupiers competing with each other in the bidding process.”

However, the competitive prices in the area, combined with a relatively low stock does mean that properties tend to sell in a period of just five or six weeks, meaning that keeping a close eye on the market is essential.

Any new developments in the pipeline?

New developments are definitely needed in the area, with derelict sites on Main Street and Lucan Road, as well as the run-down Mulberry Cottages on Martin’s Row, all ripe for a developer to come in and construct complexes that would rejuvenate the town.

A UK developer has recently purchased a site on Chapelizod Hill Road – they’re in the process of finalising the details of the build, while there is also a second site on the Lucan Road currently in the planning stages.

“The UK developer was granted planning a year ago for 33 houses on the Chapelizod Hill Road plot of land,” says Conor Steen, Hooke and MacDonald commercial surveyor. “The developer is currently looking into the possibility of instead developing the land for apartments.”

“There’s a site on the old Lucan Road that is in for planning for apartments and townhouses,” says McKeon. “But that’s in the early stages at present.”

Who’s buying in the area?

Between those potential developments, Chapelizod has space to expand, which would also keep prices fair and affordable. As a result of the current affordability, it’s largely young couples who are buying in the area: those who perhaps can’t afford to buy in The Liberties or Kilmainham, but don’t want to be as far out of town as Blanchardstown or Castleknock.

What are the exercise options?

For lovers of the outdoors, Chapelizod is almost ideally placed. To the north, the village borders with the Phoenix Park and the huge possibilities that has for recreation and sport. Running through the middle of the town, as previously mentioned, is the Liffey, which has a number of kayaking clubs and fishing spots dotted along its banks.

Donore Harriers Athletics Club and Longmeadows pitch and putt course offer further sporting activities for those who are so inclined, while Gaels-Drumfinn Avenue Park and Ballyfermot De La Salle GAA club, to the south, round out an excellent list of recreation amenities.

Where do you get a pint and a bite to eat?

The Mullingar House, visible on the approach to the village on the Chapelizod Road, is the main watering hole and eatery, serving a good carvery and varied food menu, while further down on the main road is the well-known The Villager pub. Alongside those two outlets there are the usual retail suspects: a pharmacy, corner shop and dry cleaners etc.

However, there have been a number of key closures in the last year or so: most notably the Bridge Inn and Café de Bróc on the south side of the village. These are both big losses to the life and soul of the village and have left a gaping hole in terms of hang-out places. For the village to have a bit more vitality, these need to reopen as new entities.

With both premises up for lease, whoever does get their foot in the door has almost an entire village market to capitalise on, making both premises major potential commercial investment opportunities.

How do you get there?

The village is rather out of the way as a location, which is a large part of its appeal in truth, but Chapelizod is still relatively well-connected. Eight bus routes run through the village, which connect it with both west Dublin and the city centre, and the M50 is a short drive away, meaning it’s a handy location for both city centre workers and those commuting further out of town.

Chapelizod is well served by primary schools, through St Laurence’s and St Patrick’s national schools, but for the next stage a small commute is necessary with no secondary schools in the immediate area. Instead, parents traditionally look at Mount Sackville and Castleknock Community College, as well as the very highly regarded Castleknock College.

What’s for sale in Chapelizod?

What’s for rent in Chapelizod?

The Irish professor involved in introducing European animals to Australia
3