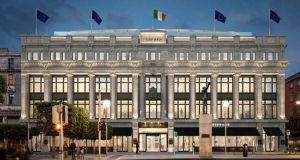 At this time of year, back before its closure, the staff at Clerys’ landmark premises on O’Connell Street in Dublin would have been gearing up for the annual December 8th influx of shoppers from across the country. Santa and his elves, meanwhile, would already have been contending there with the queue of children snaking around the corner from Sackville Place to Marlborough Street.

But, as with so many things in 2020, this year it’s altogether different, as the former department store’s new owners progress their plans for its transformation into the Clerys Quarter.

Notwithstanding the fresh challenges presented by the Covid-19 pandemic, developer Paddy McKillen’s Oakmount and its partner, Europa Capital, remain on course to deliver a major mixed-use scheme on the Clerys site that they hope will help restore O’Connell Street as the city’s principal thoroughfare.

For those curious about what will be in store once the development is completed, which is scheduled for the first quarter of 2022, the promoters of the Clerys Quarter have produced a short video to showcase its various elements.

Those still sentimental for the Clerys of old will be heartened by the sight of its grand staircase, which is being restored to its original condition to provide the centrepiece of the scheme’s ground-floor shopping area. The store’s famous tea rooms will reopen for business in 2022.

These proposed works are described by the Clerys Quarter’s architects, Henry J Lyons, as a “key element” of plans for the building, the original design of which had been based on Selfridges’s flagship store, on Oxford Street in London.

While the letting agents for the Clerys Quarter have yet to make an announcement in relation to the scheme’s office and retail occupiers, Paddy McKillen and Matt Ryan’s Press Up Entertainment Group will operate the development’s boutique hotel, which will be known as The Clery, and its rooftop bar and restaurant.

A spokeswoman for the promoters of the Clerys Quarter said: “We are in advanced discussions with a number of retail and office occupiers and we look forward to making announcements in this regard in the coming months.”