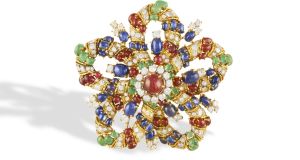 Though it appears that Christmas 2020 will be unlike any other, gifts and tokens of affection will still be a priority for many with the advent of the holiday season.

With a combined top estimate of over €1 million, the forthcoming Adam’s Fine Jewellery and Watches sale, which will take place in a live online auction at its St Stephen’s Green salesrooms on Tuesday December 8th, is a veritable Aladdin’s treasure trove.

“Unlike 90 per cent of emeralds currently in circulation, this particular stone has not been treated or enhanced, making it a highly sought-after addition to any extraordinary collection,” Claire-Laurence Mestrallet of Adam’s says.

Mid-century pieces by continental masters from Italy and France also feature in the sale.

French jeweller Jean Fouquet designed lot 42, a rare ruby and diamond “tourbillon” dress ring (€3,500 -€4,500). Fouquet, who was one of the great “artist jewellers” of the Art Deco movement, focused on industrial and geometric shapes and contrasting colours to create daring pieces.

Of the same era but with a wholly different approach, Italian designer Mario Buccellati drew inspiration from nature for lot 54, an intricate sapphire cuff (€15,000-€25,000). Once referred to as “the prince of goldsmiths”, Buccellati is famous for his use of fine gems against textured metal, incorporating methods from ancient Greece, the Middle Ages and the Renaissance.

Also catering for smaller budgets is a silver brooch designed as an abstract sailboat, by Henning Koppel for Georg Jensen from 1950 (lot 75, €150-€250) and a funky sodalite and silver ring by Vivianna Torun, also for Georg Jensen.

Sodalite, a precious metal often used as a gemstone, is said to have healing properties to bring emotional balance and calm, so there may well be a queue for this interesting ring, which was designed by one of the top Swedish silversmiths of the 20th century (lot 74, €300-€500).

The collection of watches includes top brands such as Cartier, Bulgari, Rolex, Chopard and Omega, along with a stunning diamond cocktail watch from the 1950s by Boucheron at €8,000-€10,000.

The treasure trove will be exhibited alongside the artworks being offered in Adam’s Important Art sale from Friday December 4th. Should the lockdown or restrictions be continued, Claire-Laurence Mestrallet will be available for video calls to showcase jewels to interested parties.