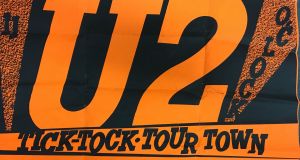 The forthcoming auction by Aidan Foley in Sixmilebridge in Co Clare this coming Tuesday offers a collection of more than 1,000 items acquired by Limerick publican Kieran Murray over the course of 40 years.

Murray, along with brothers Frank and Lorcan, and late brother Brendan, were the movers behind Limerick’s nightlife for decades, running some of the city’s best known hostelries, clubs and concert venues, including the Brazen Head, the James Joyce pub, the Savoy Theatre, Pink Elephant and Scott’s Bar in Kilkee.

One of the most interesting lots in the collection is a press release, photograph and poster for a band from 1979, who had won a talent competition in the Stella Ballroom for Limerick Civic Week on March 18th, 1978. The band won the sum of £500, which allowed them to “buy the instruments they had borrowed”.

That band was U2, who played their first ever gig under the U2 moniker in Limerick, when they won that talent competition 41 years ago.

“After they won the competition, we were sent this press pack as we were booking gigs around the city. We booked U2 for the Crescent Theatre but only 60 people turned up, when we tried to book them again, the Jesuits – who owned the Crescent – were anxious about a rock band playing, so we had to cancel the second gig,” says Kieran. U2 have since sold between 150 million and 170 million albums, with an estimated €1.5bn in concert ticket sales between 1990-2016.

What makes this pack unique is it is one of the earliest press packs of the band together as U2, who went on to dominate the world music stage for decades.

The poster is titled Tick Tock Tour Town which was their first tour, and 11 O’Clock Tick Tock was their first international single. The estimate for the pack, which also includes press clippings on the band from 1978 is €400-€600, but given the rarity of the offering, it could attract worldwide attention.

Also included from the Brazen Head, or Ted’s for those of us old enough to remember, which the Murray’s ran from 1985-2012, is a full-size Yeti which greeted guests for decades having been a film prop in its former life.

But the sale also includes some real taxidermy. The immense bison head which hung beside the bar in the Brazen Head is also for sale (€400-€600). “Thousands, literally thousands of people took photographs standing beside this bison head after putting a lit cigarette in his mouth – back in the days of smoking,” laughs Kieran. Also included is the Antelope head, from which the Brazen Head takes its logo (€600-€800).

From the James Joyce bar, which the family ran in the 1980s is a bust of James Joyce by Brian King (€1,000-€1,500) the trailblazing Irish sculptor who died in 2017. King’s works form part of our national collection; featured in Merrion Square, Farmleigh and the sublime Double Helix work at Trinity College Dublin.

King was also a music fan, and it was reported that after hearing about the death of John Lennon in December 1980, while out on a routine errand in Dublin, he just kept driving, unclear of where he was going, and ended up in Limerick City Gallery.

From the Savoy Theatre and Pink Elephant days, are two six-foot posters of Marilyn Monroe and Humphrey Bogart, along with a large black-and-white print of composer Seán  Ó Riada, which “lived most of its life in the projector box in the theatre for safekeeping”.

Old mouldings, corbels and parts of the since demolished art deco building are also listed along with rock memorabilia and posters of the plethora of bands to have passed through this historic theatre.

Over the course of its lifetime the theatre hosted Eric Clapton, Thin Lizzy, Tom Jones and Billy Connolly in addition to the Rory Gallagher concert, which in an unprecedented move was recorded by RTÉ in 1972 and is now considered a historical document in itself.

As one would expect pub memorabilia features strongly in the collection. The Michael Egan Limerick Fine Whiskey advertising sign “is so rare I have never come across one before”, says auctioneer Aidan Foley. “There are two markets for these signs; firstly someone who collects old pub signs, but the real interest is from those who reprint the posters and sell them on to Irish pubs throughout the world,” says Foley.

Kieran Murray is currently inundated with calls about ashtrays, of which there are a few hundred in the sale: “It’s quite unbelievable, but since the smoking ban people have started to collect ashtrays, with those created for Guinness by Arklow Pottery are the most requested”.

Kieran hung up his publican’s apron in 2015, and is now engaged in production management along with clearing out his vast warehouse. The sale in Sixmilebridge on Tuesday is the first of two sales of his eclectic and interesting miscellany. See irishcountryhome.com.