Make a move to Bray: it’s bracing, but beware the traffic 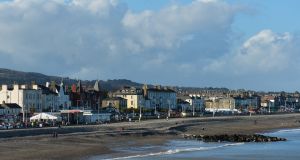 What’s so good about it?
You know somewhere is on the up when Paddy McKillen’s Press Up empire is moving into town. Sure enough, plans are reportedly afoot for an Elephant & Castle and a Stella cinema to arrive into town soon.

Even without this ringing endorsement, Bray is a lively seaside town packed solid with amenities. A mere 45-minute Dart trip into Tara Street, Bray’s denizens benefit from a wealth of bars, restaurants, shops, libraries and schools. So far, so unremarkable . . . yet add in the mile-long promenade, the harbour, Bray Head, Cliff Walk and its own yearly air display and the coastal town seriously comes into its own.

Cultural spaces at the Mermaid Arts Centre and the Signal Arts Centre, as well as weekly farmer’s markets at Kilruddery Estate, make this more than your garden-variety commuter town.

What’s not so good?
Locals have lamented the lack of a local cinema for a while, noting that the closest cinema (excepting regular film screenings at the Mermaid) is in Dún Laoghaire, a 15-minute Dart ride away. Still, the promise of a new Stella cinema, as well as a proposed cinema at the new Florentine Centre, should soon see to that.

Also, rush hour puts into doubt the “hour from Dublin” claim, especially on the N11.

Where and what to buy?
Houses make up 85 per cent of the property market, while apartments account for 13 per cent of stock.

New to the market, 3 The Old Stables is a mock-Edwardian 4-bed, 3-bath new build (2016) close to the sea and Dart station, on the market for €550,000 (Sherry Fitzgerald Bray). On Quinsborough Road’s Prince of Wales Terrace, an imposing, 382 sq m period property, currently used as offices, is on the market for €750,000 (via Vincent Finnegan).

Where and what to rent?
Rentals aren’t quite as plentiful as stock for sale, but there’s still value to be had. Expect a central 2-bed townhouse to rent for around €1,400-€1,500 a month, while a 4-bed family home could set you back around €2,000.

Where to eat and drink?
Where to begin? The Harbour Bar (1 Strand Road) was once deemed the Best Bar In The World by Lonely Planet. A little further along the seaside strip, the Boomerang Bar (7 Quinsborough Road), Platform Pizza Bar (Strand Road) and award-winning gastropub Butler & Barry (Strand Road) are all pretty lively spots, with casual eating options aplenty. Dockyard No 8 (Harbour Industrial Estate) may look unremarkable enough from the outside, but locals swear by their fresh fish dishes. The Wild Goose (79-80 Main Street), Galito (113 Main Street) and Café Ragazzi (3 Aubrey Court, Parnell Road) are all definitely worth a visit.

Who lives there?
Given that it’s the ninth biggest urban area in Ireland, and the housing stock runs from small apartments to seafront family homes, Bray’s population is a wonderfully mixed bag, from longstanding residents and young families. Some 34 per cent of the population is made up of couples with children, and 28 per cent of the population is aged between 16 and 34, according to MyHome.ie research. Many buyers have an existing relationship with the town, which helps to add to the sense of community.

Good for families?
Two words: seaside playground. Bray was day-tripper heaven for many years, so it stands to reason that families will find much to like here. Sea Life on the Strand Road is a great attraction for all kids, while the Bray-Greystones trail is a good excuse to get the whole family active. Bray Adventures offers surfing, kayaking, raft building and rock climbing for kids aged 8 to 16.

Getting there and getting around
The Dart is the quickest way to get from Dublin’s city centre and makes for one of Ireland’s most scenic commutes. Dublin Bus also runs from the city to Bray (45A, 84 and 84A, 145), while the Aircoach picks up in Bray on its way to Dublin Airport. The N11 is the main route in and out of Bray, but good luck getting anywhere in a hurry during rush hour.

What do locals say?
“It’s very like where I grew up (in Youghal), a seaside town near the city. When we went to buy, a lot of the places we could afford in South Dublin were in faceless estates 20 minutes from the nearest shop, and I didn’t want that. I wanted to be in a neighbourhood and Bray is a proper town with its own identity. There are lots of good places to go out, there’s a good social life, and the Harbour is the best bar in Ireland. My commute into town is an hour and 20 minutes, and I’ve read more books in the last four years since moving to Bray than I had in the previous 20.”  Walter Jayawardene, civil servant