Robert Ballagh at 77: still stamping his mark on Irish art 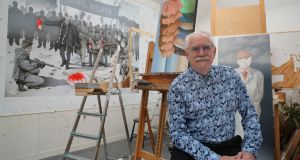 At 77, Robert Ballagh, one of Ireland’s most successful and controversial artists is still painting away at his studio on Arbour Hill in Stoneybatter.

The artist, whose works grace the walls of museums and private collections worldwide, rose to fame in the 1980s. His portrait of Irish politician Noel Browne was used as the cover of Browne’s best-selling book Against the Tide – at Browne’s request – putting the artist firmly on the international art stage.

His brightly-lit though unassuming studio, overlooked by towering greenery from a courtyard, lies at the end of meandering corridors lined with boxes, crates and canvasses.

Here three of his current works – a portrait of an Irish doctor, three generations of a Danish member of parliament’s family and a painting of his home in nearby Broadstone – sit on easels awaiting completion by his unceasing eye for perfection.

But art was not the initial career choice for Ballagh, who is celebrated for his hyper-realistic renderings of well-known Irish figures.

“When I’d finished school [at Blackrock College] I remember a family meeting about what I was going to do with my life. While my father was laid back, I remember my mother saying they would support me in anything I decided upon with the exception of art.”

Ballagh goes on to explain that at that time his cousin Noah, a talented artist and musician in his early 20s, took his own life in London which left such a mark on his family “that art was not the thing to do”.

While playing in a series of bands since the age of 14, with his parents thinking “this too shall pass”, they decided that Ballagh should study architecture.

After three years in Bolton Street “which was a good choice as I had an excellent tutor in Robin Walker” [the influential Irish architect who had worked under Le Corbusier in France and Mies van der Rohe in Chicago], he moved on.

“ While I found it rewarding, after three years they had lost patience with me, and I with them. Also my music was getting in the way.”

In the early 1960s, after losing two musician friends in car crashes, Ballagh packed in his musical career, having spent a good number of years travelling the country with his band The Chessmen.

Self-taught in both music and art, the skills he honed in architecture were to help form the basis for much of his work: “I plot every picture on a drawing board with a T square – which is something even architects don’t do anymore, as they all use CAD (computer aided design).”

He credits John Coyle, his art teacher at school as “being really encouraging, as he showed me I was good at something”.

Both his parents were high-achievers in sport; his father, Robert senior, played cricket and tennis for Ireland, and his mother was on the Irish hockey team. “But because of my build and eyesight I wasn’t great at any of it,” he recalls.

One night in Toner’s Bar in Dublin, he was introduced to Michael Farrell, the influential Irish artist, who was in search of an apprentice: “He asked me if I could paint a straight line and, as I could, the deal he offered me was £5 per week with all the drink I could take.”

He admits to learning an awful lot under Farrell who taught him the “practical skills to earn a living as an artist”  while they worked on two very large paintings for what was then the National Bank of Ireland on College Green.

Within a year, Ballagh had married his wife, Betty, and for financial security took a job as a draughtsman where he “was drawing up windows for office blocks”. The way his face winces at the recollection tells that his passions lay elsewhere and in 1968 he became a full time artist.

But life as an artist in 1970s Ireland was not the easiest way to make a living: “With a small population and a tiny percentage of those who buy art, it was really only a handful of people that sustained the industry.”

Becoming and art teacher was not an option, as he was not qualified, but some fortuitous encounters and a commission from the then Department of Posts and Telegraphs, saw him design up to 70 postage stamps and later bank notes which were displaced by the advent of the euro.

A call from Michael Colgan at the Gate Theatre began his long-standing relationship with the design of theatre sets, the culmination of which was 12 years designing sets for the highly successful Riverdance show.

“It was an interesting time. As a painter you work as a solo activity, but with theatre it’s a great diversion as you are part of a team and it was all a great adventure.”

It was also the first time the artist achieved financial security.

He describes designing sets for the Radio City Music Hall in New York as “phenomenal” as he remembered the striking art deco auditorium, with a 6,000 seat capacity, from watching films in his youth.

Sometimes the portrait can grow into something really special

In 2011 rumours that he would run for the Áras, led him to retort: “I am in the business of painting canvasses, not canvassing for votes.”

One of his proudest commissions – which account for three-quarters of all his work – was a piece for the Albrecht Durer House Museum in Nuremberg.

“I felt really honoured as I hold Durer in such regard,” he says of the work based on the birth of perspective.

A commission by James Watson for a portrait of Francis Crick – the scientists who won the Nobel Prize for Medicine along with Maurice Wilkins in 1962 – which Watson donated to the Francis Crick Institute in London, saw the start of a lifelong friendship between Watson and Ballagh. They recently celebrated Watson’s 90th birthday on Long Island.

“Sometimes the portrait can grow into something really special,” says Ballagh.

It appears that, close to his 80th year, there is no stopping the tour de force that is Robert Ballagh whose vision, skill and dedication to his craft are some of the many reasons why he is one of Ireland’s best known and most popular artists.

The more the British learn about Ireland’s loyalists, the less they like
4