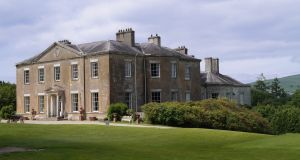 Surrounded by the immaculate greens of Coolattin Golf Club and the tranquil fields of southwest Wicklow, Coolattin House is a quiet place these days.

It’s hard to imagine what it must have been like when it was the hub of one of Ireland’s biggest and wealthiest Anglo-Irish estates – but for the third year in a row, Sheppard’s auctioneers from Durrow are bringing this impressive building temporarily back to life by using it as a venue for their annual height-of-summer country house auction.

Though it has been unoccupied for decades, the five-bay, two-storey house retains elegance and presence by the bucketload, making it an ideal backdrop for the 1,800-plus lots which will be sold over the three days of the auction.

Many of the items come from the collection of the late Gerard O’Keeffe – a man who knew a top-notch house when he saw one. One of Ireland’s best-known solicitors, O’Keeffe was born in Mallow, set up a practice in Kanturk, Co Cork and was involved in offices in Dublin, Killarney, Mallow and Cork city. Until his death in May 2015 he lived in Park House, Kanturk, an 1820s mansion which he rebuilt after it burned down in 2001.

At one stage O’Keeffe owned a circular house offering stunning 360-degree views of the Dingle Peninsula – and his Dalkey retreat, Martha’s Vineyard on Coliemore Road, was sold to the film-maker Jim Sheridan.

An avid collector of furniture, books, paintings and objets d’art, O’Keeffe suffered substantial losses – as well as physical injuries – in the 2001 fire. Once he had rebuilt Park House, however, he want about acquiring replacements with indefatigable enthusiasm and an eye honed by decades of collecting experience.

One can only speculate as to how he might react to finding some of his artworks displayed in the atmospheric rooms at Coolattin. The connection with a historic family would undoubtedly have appealed to the colourful O’Keeffe, who served as the chieftain of the O’Keeffe clan for a time.

He had a keen interest in the work of the reclusive American painter Georgia O’Keeffe, having encountered her work in the mid-1980s through a book given to him by the late Michael O’Leary, a former tanaiste and leader of the Labour Party. He was also fascinated by the writing of Oscar Wilde and the details of the legal case brought against Wilde by the Marquess of Queensberry.