Trump’s early pick for US ambassador to Ireland, Brian Burns, is selling his Irish art 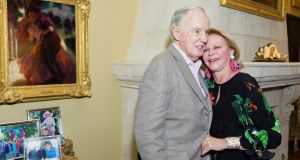 A major art collection belonging to the Irish-American business lawyer and entrepreneur Brian Burns is to be be auctioned at Sotheby’s of London in the autumn.

Recognised in 2000 as one of the top 100 Irish-Americans in the book Greatest Irish-Americans of the 20th Century, Burns has also been inducted into the Irish-American Hall of Fame in the same class as former US vice-president Joe Biden. In 2017, he was nominated by President Donald Trump as the US Ambassador to Ireland, but had to withdraw his candidacy for health reasons.

Some 100 works of art from his collection will be sold, including paintings by Jack B Yeats, Roderic O’ Conor, Sir John Lavery, Sir William Orpen, Water Osborne, William Leech and Nathaniel Hone.

A preview exhibition of highlights is in Chicago until Friday, followed by a showing in Boston (June 19th and 20th). The paintings will be shown at the RHA Gallery in Dublin on August 30th-September 1st.

Reaching nearly 200 works at its peak and spanning artists from the 18th century to the present day, the collection represents Burns’s determination to pay tribute to his Irish heritage and bring the achievements of Irish artists to a wide audience.

The original focus of the Burns collection was on narrative works highlighting the struggles of Ireland’s poor in the 19th century. Unlike some collectors, Burns was not put off by such imagery: “I wasn’t afraid of it. It was part of my family story,” he said. “I’ve always been aware that we were one generation away from an $18-a-week, crippled Boston motorman. I have a lot of lest-we-forget pictures.”

Later, with the encouragement of his wife Eileen, Burns began to look to artists who trained or worked abroad, often in Paris or London. The result was a collection which took on a more modern, outward-looking perspective – and, as it developed over the years, the Burns collection was influential in prompting a reconsideration of what constituted Irish art.

A third-generation Irish-American, Burns founded the John J Burns Library at Boston College in 1986, in honour of his father John, who was an adviser to former US president John F Kennedy’s father Joe. The institution is renowned for documenting the literature, history, music and culture of Ireland and the Irish of Boston.

Burns has also served on various boards, including the Irish American Fulbright Commission in Dublin, the Ireland-American Economic Advisory Board to the Prime Minister of Ireland and Trinity College Foundation, Dublin. In 1986, he was instrumental in merging the American-Irish Foundation with the Ireland Fund to create the American-Ireland Fund.

“Some have asked,” Burns said, “why Eileen and I have chosen this time to return a large group of paintings from our Irish art collection to the market. Many years ago, when I started collecting, I was advised by Desmond Fitzgerald, the 29th Knight of Glin, Desmond Guinness, and other art advisers in Ireland to remember that no matter how many paintings I might acquire, I was only a custodian of them during my lifetime. Now at 80-plus years old, and with a collection of more than 200 works, it seemed an appropriate time.”