The dancer’s taste is eclectic if nothing else, judging by the sale of items from his Co Cork estate 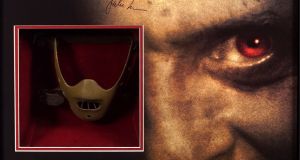 Someone out there has just paid €85,000 for an extremely creepy piece of movie history owned by dancer Michael Flatley. This was the price fetched auction on Thursday for the muzzle-like mask worn by actor Anthony Hopkins as Hannibal Lecter. It was one of several hundred items from Flatley’s house, Castlehyde, in Fermoy, Co Cork, being auctioned over two days by Sheppard’s Auction House of Durrow, Co Laois.

Advertised as a “residue” sale, the mask – on a poster background signed by Hopkins and Julianne Moore, the two stars of The Silence of the Lambs sequel Hannibal – had been estimated to fetch between €80,000 to €120,000. It was the star item in the hundreds of items Flatley was selling off in his extensive house clear-out, and there were 346 bidders watching it online when it sold.

The second priciest lot was a painting created by Flatley himself. Known for coating the soles of his shoes with paint and then dancing on canvas to create art, the piece, an acrylic on vinyl titled The Finish Line, had an estimated value of €30,000-€50,000. There were 273 bidders online when it came up for sale, with the opening €15,000 bid leading to a sale at €37,000.

If you were in the market for suits of armour, mounted gazelle heads, decommissioned guns, zebra-fur framed mirrors, and bamboo parasols, they were all on offer by the multiples. What’s a parasol worth anyway? Lot 23, one bamboo parasol, sold for €25. Perhaps the most random item of the day was Lot number 80. In these Covid-19 times, it’s fair to say we’re all much more conscious of having tissues to the ready. Roll up, lot number 80; the Versace designer tissue dispenser, which sold for €420, minus the tissues.

Five “gorgeous cushions”, as auctioneer Michael Sheppard described them, sold for €190. The cushions were being sold off, as were the couches, armchairs, chaise longues, and settees they had presumably been scattered on. It’s a wonder there is anywhere left to sit in Castlehyde, so numerous were the settees on sale, but perhaps the occupants spend most of their time upright, dancing, and have not much use for things one sits on. A pair of carved gilt settees, estimated at €1,500 to €2,500, sold for €1,700. “Very cheap!” the auctioneer declared sorrowfully, as he reluctantly brought down the gavel.

Gilt and a rococo style was a theme: gilt mirrors, gilt tables, gilt chaise longue, gilt chess sets. Maybe it’s the recent popularity of the chess-themed Netflix hit, The Queen’s Gambit, but a gilt chess set fetched €1,000, while a pair of gilt tables with marble tops fetched a comparatively paltry €650.

Flatley appears to be a person of eclectic taste. Along with the chaise longues and the gazelle heads, and the many chess sets, he also sold off a carved wooden eagle with a gilded beak, which fetched €1,700. An empty gun cabinet – “A proper gun cabinet with reinforced glass and doors,” as the auctioneer pointed out – sold for €750. A pipe with a tortoiseshell stem went for €130.

But a Lladro china ornament of a golfer did sell, for €101. So too did an item described puzzlingly as a “rich marble plinth”, which went for €700. A pair of upright speakers went for €100. They would probably look good on top of the plinth.

The longest period of bidding was not for the mask Anthony Hopkins wore in a movie, nor for the painting Michael Flatley created himself, but for a bar unit. We all know most public bars have been closed for months now, which may have prompted the aggressive bidding on this mahogany bar unit with its marble and brass top. The bids went up in multiples of hundreds for several minutes, and it finally sold for €8,200. This was more than €5,000 over the estimate, so someone really, really wanted that bar, and perhaps with it, a reminder of more normal times.

The auction of items from Castlehyde, including other Irish estates, continues on Friday morning. sheppards.ie

This article was updated on Friday, November 27th, to clarify that the Hannibal Lecter mask sold  at auction is on a poster background signed by Anthony Hopkins and Julianne Moore, the stars of  The Silence of the Lambs sequel, Hannibal