Palmerston Road redbrick brings its A game for €3.25m 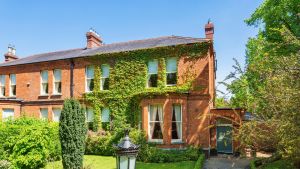 A house number that includes a letter often suggests a mews property or perhaps a house built in a side garden. Not so on Palmerston Road where in the 1880s as the Rathmines Road was being developed, a builder constructed eight houses on a plot close to the Palmerston Park end of this leafy, always premium Dublin 6 road.

Their addresses range from 42A to 42H, although all the fine two-storey, non-basement houses have names which are probably used more than their numbers. It’s notable too that there is a number 42 Palmerston Road but it is a different type of house further down the road and nothing to do with these properties.

Fenloe, at 42A Palmerston Road, was a family home for a couple of decades before its owner downsized and it became a rental. It’s now for sale through Sherry FitzGerald seeking €3.25 million.

Extending to 306sq m/ 3,294sq ft, Fenloe is semi-detached. While two storey to the front, it is three to the rear and so the accommodation is spread over three floors. It has six bedrooms – these houses were built for families who had live-in staff. One of the bedrooms, to the rear, has its own study though this could become an en suite or a dressing room depending on the needs of the new owners. Just one bedroom in the current layout has an en suite while the family bathroom at the top of the house features a free-standing bath.

The entrance is to the side so the door, topped with a fanlight, opens into an outer hall where the period features reflect the attractive Victorian decorative details seen throughout the house. This entrance hall has a quarry tiled floor, a dado rail, a sash window and a detailed corniced ceiling.

It opens into a room-size inner hall – all the rooms in this house with their high ceilings and good proportions are spacious. To the front are two large reception rooms – a fine formal drawing room with a bay window, and a dining room – each, like the bedrooms above, have two tall sash windows. To the rear there is a family room – it has been used as a playroom in recent years – and a breakfast room interconnecting to the country-style kitchen. Back here there’s also a utility and other store rooms.

The long rear garden is mature, with a patio directly outside the kitchen and a charming summer house at the end. Its length gives buyers scope to extend the kitchen or across the back, subject to planning; these houses are protected. There is vehicular access to the rear giving Fenloe valuable private parking although on-street parking to the front is also available.

Last year saw two sales on this stretch, Hadleigh at 42E sold for €2.65 million – it was an executor’s sale going on the market after its 100-year-old owner died. It required significant renovation. Later in the year Glenburn at 42H, renovated over the years, was sold by a downsizer for €2.745 million.