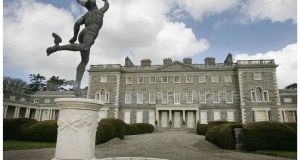 Carton House. Over two centuries earls, dukes, lords and a loanshark presided as head of a dining table, which is about to go under the hammer at Sotheby’s in London. Photograph: Alan Betson 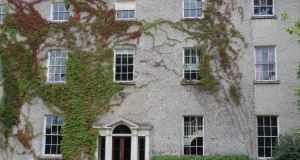 Almost 70 lots appear from Killadoon House in Co Kildare, which was built by Robert Clements between 1767 and 1771 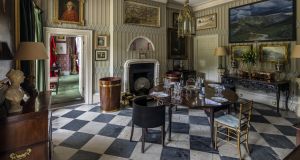 If pieces of furniture could talk and recount tales from their use, perhaps lot 72 in the forthcoming Royal and Noble sale by Sotheby’s in London, on January 21st, would have some interesting anecdotes from its 200-year history.

The Regency rosewood-banded mahogany table, attributed to Mack, Williams & Gibton of Dublin, was described “as arguably the most important Irish dining table of the period” by Desmond Guinness and William Ryan in their book Irish Houses and Castles.

Set over seven pedestals and extending to more than 25ft in length, it will certainly require quite the diningroom to accommodate its size.

The tabled was designed in 1815 by neoclassical architect Richard Morrison from a commision by the third Duke of Leinster as the centrepiece for the diningroom at Carton House, which was then the seat of the FitzGeralds and earls of Kildare.

However, rash behaviour by the seventh duke ended the FitzGerald connection with Carton House and the table. At just 18 years old and riddled with debt, the young duke sold off his birthright to a moneylender.

Over two centuries earls, dukes, lords and a loanshark presided as head of this dining table, where French horns were purported to be played to diners at breakfast and dinner.

Before its sale and conversion to a hotel and golf course in the latter part of the 20th century, Carton House was utilised as a film location, with Stanley Kubrick (Barry Lyndon) and Lee Marvin (The Big Red One) using the house, as did Julie Andrews and husband Blake Edwards when they spent the best part of 1969 living at Carton during the filming of Darling Lili.

The contents of additional notable Irish houses also feature in the sale. Almost 70 lots appear from Killadoon House in Co Kildare, which was built by Robert Clements between 1767 and 1771.

The furniture in Killadoon owes a great deal to the glittering career of Robert’s father, Nathaniel Clements, who is said to have risen from obscurity to opulence.

Having undertaken a staggering range of commissions over his lifetime, which included being deputy constable at Dublin Castle and a searcher and packer at Dublin Port, Clements rose to become a property magnate and the amateur architect who designed Áras an Uachtaráin, after holding the post of ranger at Phoenix Park.

The provenance of quite a number of the lots included in the sale are listed as being acquired by Nathaniel Clements over his lifetime.

Most important is a pair of wooden equestrian battle scenes by Antoine-Marie Melotte from 1753, which hung in the entrance hall at Killadoon.

Carved in relief, the large scenes are “testament to the tradition of Baroque wood carving in the Flemish city of Liege in the 18th century”, according to the catalogue.

One of Melotte’s most important patrons was Catherine the Great of Russia, which probably explains why Magnanimity of Alexander the Great, a smaller carving than the piece in the Sotheby’s sale, now graces the walls of the Hermitage Museum in St Petersburg. (€35,100-€58,500).

A further lot with links to an important Irish country house is lot 71, which the catalogue lists as the “property from a noble Irish family”.

The George II side table dating from circa 1730 was brought to Birr Castle by Anne, Countess of Rosse, who was described in the early 1900s as one of the “bright young things” by the English and Irish media.

She proposed the founding of the Victorian Society, which through magazines and events promoted the appreciation of Victorian buildings and heritage.

The table has resided at Birr Castle since Anne married Michael Parsons, sixth Earl of Rosse, in 1935, and its embellishments include a Vitruvian scroll carved tablet with shells flanking scalloped aprons on square bun feet (€38,100-€58,500).

And finally, Sotheby’s has some of the contents from the Luggala estate in Co Wicklow.

Much of the contents of the old hunting lodge were sold in a well-publicised auction in 2006, when Garech Browne famously pulled some of his collection of Claddagh rings – which are now, finally, featured in this sale – and include a very rare Claddagh ring dating from 1700 (lot 192; €2,950-€5,300).

Browne had a noted eye for silver, and the 2006 sale saw strong results, especially when a private buyer paid €37,000 for a set of four Dublin wine coasters by William Nolan from 1824.

This sale also includes pieces of silver which, given Browne’s penchant for entertaining, would have been used by visitors to Luggala. (Actor John Hurt described Browne thus: “Here he collects poets and pipers, druids and drunks, landed and stranded gentry.”)

Finally, an item that fits with Browne’s eccentric character. Though relatively commonplace in the 1800s, lot 237 is a silver nipple shield from 1821 – something that would have been used by a well-to-do breastfeeding mother (€400-€600)