Don’t hibernate: there’s plenty to do in the January garden

It may be cold and muddy but there’s pruning, planting and planning to be done 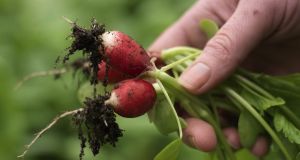 There’s not a lot to be said for the garden in late January. All that mud and rain. Those grey sullen skies. The lack of light. And yet I relish this time of the year for the opportunities it gives us gardeners to come up for air, to play catch-up as well as to dream and plan. Plus for those in the mood for a spot of leisurely late-winter gardening, there are still jobs to be done.

This is the time of year, for example, to carry out the solitary, muddy-kneed, finger-pricking yet curiously rewarding annual garden ritual that is rose pruning. The same goes for the annual late-winter pruning of apple trees, pear trees, currant and gooseberry bushes as well as autumn-fruiting raspberry canes. As for prepping the polytunnel or glasshouse for the busy season ahead, it is, I promise,  the horticultural equivalent of de-cluttering, while the first ritual seed-sowing of the new year is about as life-affirming as it gets.

It’s also a nice way to beat the crazy, helter-skelter rush of spring. If you’re a flower lover, for example, then late January/ February is a good time to sow seed under cover of certain (but not all) kinds of hardy annuals such as sweet pea, larkspur, snapdragons and cerinthe, which can be planted out into the garden in spring to be in generous bloom by summer.

Just bear in mind that most will need the generous bottom heat of an electric propagator or heat mat to successfully germinate; exceptions include sweet pea, larkspur and Icelandic poppies, which germinate best in cooler conditions (on a bright window sill in an unheated room, for example). The tubers of dahlias and begonias can also be started off under cover in the coming weeks.

Likewise, if you live in one of the milder parts of the country and can give young plants protection in the form of a polytunnel, glasshouse or conservatory, then it’s also not too early to start sowing seed of certain kinds of vegetables including early varieties of leeks, onions, cabbage, carrots and cauliflower as well as aubergines, peppers, chillies, Swiss chard, radishes, mangetout peas (take precautions against mice), lettuce (looseleaf, cos and butterhead types) and oriental leaves such as rocket, mibuna and mizuna.

But again, make sure to check the recommended temperature for optimum germination rates when sowing as these will vary greatly according to individual species. Bear in mind too that some- for example aubergines, peppers and chillies- will only flourish if you can guarantee them steady gentle heat. In colder parts of the country (or if a cold spell is forecast), delay sowing for a few weeks.

To minimise the risk of what’s known as damping-off (a disease that sometimes afflicts young seedlings), sow seed thinly, use a good quality seed compost with a fine top dressing of sieved vermiculite (you’ll find the latter in all good garden centres) and always bottom-water by placing the seed tray/ pot in a shallow container of tepid water rather than dousing it from above.

Enclosing the seed tray/ pot in a clear plastic bag or lid will also help to maximise germination rates. On chilly nights, give vulnerable seedlings extra protection with a layer of two or horticultural fleece but make sure to remove it during the day to ensure sufficient ventilation. Remember also that light levels have just as much of an effect on growth levels as temperature does. The more natural light you can give them, the sturdier and healthier the resulting seedlings will be.

Seed sowing aside, this is also the time to order seed potatoes (especially enduringly popular or newly- introduced varieties such as ‘Pink Fir Apple’ and ‘Vitabella’ that inevitably sell out quickly) as well as to start pre-sprouting or ‘chitting’ them for an extra-early crop. Spread out, “eyes” up, in a shallow tray or egg carton and placed in a cool, bright but frost-free spot, they will slowly start into growth and can be planted out into the garden from mid-March or earlier again in the polytunnel/ glasshouse.

Pruning is another key gardening job traditionally carried out at this time of year while plants are in winter hibernation, the essential aim being to remove dead, dying and diseased wood and promote plenty of new healthy growth.

At the National Botanic Gardens in Glasnevin, its gardeners carry out the annual thorny job of rose pruning from late January to mid-February with the exact method of pruning varying according to the type of rose (for example, hybrid teas get a moderately hard pruning while patio roses, climbers and shrub roses typically receive a lighter trim). If in doubt, seek out a copy of Dr Hessayon’s classic guide, ‘The Rose Expert’.

If you grow the ornamental climber known as wisteria, then late winter is also a great time to give established plants their annual winter pruning, using a sharp secateurs to cut the individual shoots back to 3-4 healthy buds. Similarly grapevines and fig trees both benefit from an annual winter pruning (between December-January) to boost productivity (see rhs.org.uk for step-by-step instructions).

So, too, do certain species of the ornamental climber clematis; those belonging to what’s known as Group 3  (this includes varieties of the summer-flowering Clematis texensis, Clematis viticella and Clematis tangutica as well as some large-flowered hybrids including Clematis Jackmanii and Clematis Perle d’Azure ) should be pruned back hard to 30cm above ground level in February-early March to prevent them from making a messy tangle of top-heavy growth.

As long as soil conditions aren’t waterlogged or frozen, late winter/early spring is also, of course, a good time of year to plant bare-root and root-balled plants. Many varieties of fruiting and ornamental trees, shrubs and hedging can be purchased this way from Irish garden centres and nurseries at a considerably lower price than their pot-grown equivalents.

Last but not least, don’t give up on those bags of spring-flowering bulbs sitting in your garden shed since last autumn. Discard any mouldy ones and then plant the remainder as soon as you can; true, they won’t produce the longest-stemmed, largest blooms you’ve ever seen but they’ll still put on a heartwarming display.

This Week in the Garden:

Check any dahlia tubers that you’re overwintering undercover and cut away or discard any showing signs of rot/ decay to prevent it from spreading to healthy tubers. Make sure that healthy tubers in storage are protected from possible frost damage by covering them with an old blanket/ several layers of garden fleece/ straw/ dried leaves or a generous layer of spent compost or dry soil.

February 1st marks the start of  ‘Snowdrop Month in Carlow’ with a host of events lined up including the annual Snowdrop Gala and guided tours of Altamont gardens by its head gardener Paul Cutler (pre-booking advised) while  a clutch of other well-known Carlow gardens with great snowdrop collections will also be opening to the public including Burtown Gardens, Huntington Castle and Shankill Castle, see carlowgardentrail.com for details