In with the Old: 2018 saw a recovery in fine art and antiques sales 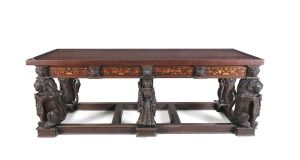 Those who have been in the antiques business for many years will confirm that just when they think they’ve seen it all, something completely unprecedented comes under the hammer.

The table which led the Adam’s Townley Hall Country Collections sale in autumn was one such piece. Created from the timbers and decorative carvings of a galleon from the Spanish Armada which foundered off the coast near Doonbeg, Co Clare 430 years ago, the astonishing three-metre-long refectory table boasts a series of grotesque masks, elaborate heraldic lion corner supports, an intricately inlaid marquetry frieze and two pillared legs in the form of figures of Hope and Charity.

Described by the Knight of Glin, Desmond FitzGerald, as “one of the most important and earliest pieces of Irish furniture”, the Armada table was presented to the O’Brien clan. It spent 300 years at Dromoland Castle, Co Clare before being given on extended loan to Bunratty Castle, Co Limerick, where it became a major tourist attraction.

The 18th Baron Inchiquin, Conor O’Brien, said he was selling the table for financial reasons. But there were many who felt that, as an irreplaceable piece of Irish cultural history, it should not be offered at auction. The Irish Georgian Society wrote to Josepha Madigan TD, Minister for Culture, Heritage & the Gaeltacht, expressing its concerns and calling for Government intervention.

It was announced after the sale that the table will be staying in Ireland but, so far, no one knows where it will be located or whether it will be accessible to the public.

The biggest “blue-chip” names on the Irish fine art auction scene this year turned out, once again, to be those of Jack B Yeats and Louis le Brocquy.

The highest price paid for a painting in Ireland in 2018 was €370,000, at Whyte’s October sale. The honours went to Jack B Yeats’s Pilot, Sligo River, a dramatic portrait of a bearded figure in peaked cap and double-breasted jacket, standing tall against a blustery sky and the village of Rosses Point.

These painters – and, tucked in just behind them, Paul Henry – tended to dominate the “top lots” lists, but there were encouraging developments elsewhere in the fine art market in 2018. Prices at the higher end of the market may not have returned to the peaks of the pre-recession period, but results strengthened as the year proceeded, and there was a steady climb in the mid-range area of the market.

There were also consistently good results for works by Irish women painters, especially Norah McGuinness, whose Evening Flight fetched €22,000 at Adam’s in September. The study of seabirds in Dublin Bay was part of a collection belonging to the late playwright Brian Friel; proceeds from the sale, a total of €162,300, were donated by Anne Friel to the Peter McVerry Trust.

At Whyte’s in November, a striking self-portrait by Margaret Crilley, perhaps better known by her married name of Margaret Clarke (her husband was the stained-glass artist Harry Clarke), which had been estimated at €20,000-€30,000, sold for €48,000.

It was a good year, too, for Gerard Dillon, whose cheeky painting of a bird perched on an Atlantic cliff-face made €46,000 at Adam’s; and at Sotheby’s New Bond Street sale of Irish Art, Dillon’s Lobster Pots sold for €237,851, a new record price for the artist. That Sotheby’s sale, led by Jack B Yeats’s Sunday Evening in September (€441,003) and John Luke’s Pax (€251,842) brought a total of nearly €3 million. It was the highest total since the London auction house reintroduced dedicated auctions of Irish art in 2015 – and a good way for Sotheby’s to round off a year which marked 40 years of its Irish operations. At Christie’s Modern British Art sale in June, Sean Scully’s pastel M.18.04 made €556,686, a record in the medium for the artist.

The biggest sale of the year – in every sense – was Adam’s Country House Collections auction at Townley Hall near Drogheda, Co Louth, in October. The Armada table grabbed all the headlines, but the sale’s 730 high-quality lots achieved some impressive prices across the board. A four-door Irish George III mahogany breakfront bookcase which had been part of the original furnishings of Ely House in Dublin, and was once owned by Dr Thornley Stoker (brother of Dracula author Bram), fetched €75,000. A pair of giant Irish deer antlers from 12,000-8,000 BC made €47,000; a portrait of Captain Edward O’Brien by Robert Hunter made €38,000; and an Irish George II mahogany side table circa 1750 sold for €37,500.

Another set of prehistoric elk antlers came under the hammer at Fonsie Mealy’s Milford House sale in Co Carlow in November – and ended up as the top lot, making €23,000. Bidders paid top dollar for items from the Georgian house, home to a prosperous milling family, which had never been on the market since it was built in 1799. Two pairs of 17th-century Italian still-life paintings by Anielo Ascione made €20,000 and €16,000 respectively, a Georgian period mahogany bachelor’s chest made €7,400 (Lot 129, €1,500-€2,000) and an Irish Victorian dining table and set of six balloon-back dining chairs made €7,000 each.

On the question of whether it’s better to gather up oriental items and place them in a specialist sale – as Adam’s did in early November with its 330-lot Fine Oriental Ceramics, Sculpture & Art auction – or include them in more general sales, as the Durrow auction house Sheppard’s did with its Masterworks sale on November 8th, the jury seems to be still out.

Around the country, big prices for oriental pieces included a Chinese blue-and-white dragon bowl, listed as possibly Ming and carrying an estimate of €20,000-€30,000, which made €95,000 at Sheppard’s on-the-premises Lissaniskey House sale outside Nenagh, Co Tipperary in May. At Mullen’s Laurel Park, Bray, Co Wicklow in March, a 20th-century Chinese painting on porcelain, Tai Wing Wah’s Female in a Landscape with Moon, made €18,000 – three times its top estimate of €6,000. And at Fonsie Mealy’s above-mentioned Milford House auction, a 19th-century Chinese carved wooden Buddha – just seven inches high – soared away from its modest estimate of €500-€700 to fetch a stunning €13,000.

Early in the year, an autographed manuscript of Francis Ledwidge’s Lament for Thomas MacDonagh, with its famous opening line “He shall not hear the bittern cry . . .” sold for €18,700 at Bonhams in Knightsbridge, London. In May, a rare first edition of JRR Tolkien’s The Hobbit made €29,000 at Fonsie Mealy’s Rare Book & Collector’s Sale in Kilkenny. And in October there was great excitement at Usher’s Auction Rooms in Kells, Co Meath, when an estate book from Famine times, complete with hand-coloured maps, passed its €1,000-€1,500 estimate by some margin to make €7,200.

But even these prices were eclipsed by the results from Fonsie Mealy’s sale at the Talbot Hotel in Stillorgan in December. A pair of pince-nez glasses which once belonged to James Joyce made the headlines when they sold for €17,000, but the prices achieved by two rare books were perhaps more significant, showing that the market for top-end collecting is vibrant. A rare 1892 edition of WB Yeats’s The Wanderings of Oisin, inscribed “To my friend Maud Gonne”, carried the memorable lot number 666, and a guide price of €10,000-€15,000; it sold for €48,000.

This category embraces all manner of odd objects, but it may be the first time it has contained a pair of bashed-up rugby boots. This collectible pair, which belonged to the newly crowned World Rugby Player of the Year, Johnny Sexton, were sold for €15,500 at Sheppard’s auction rooms in Durrow, Co Laois – and raised €25,500 for the medical treatment of eight-year-old Anna Browne from Mallow, Co Cork when the under-bidder donated a further €10,000 to the charity.

A new addition to the 2018 calendar was a series of mammoth two-day interiors auctions at the Heritage Hotel, Killenard, Co Laois. Conducted by the antiques dealer Niall Mullen in conjunction with Victor Mee Auctions Ltd, these “signature auctions” featured many oversized items salvaged from well-known Dublin pubs, nightclubs and restaurants.

Whyte’s began its 2018 series of Eclectic Collector sales with a record price, as a 1958 poster for the film Dracula made €16,000. There was another big Eclectic Collector price in May when a very rare half crown, issued in 1690 during the Williamite wars, made €10,500 while, in September, a rib from the wing of the first plane to cross the Atlantic sold for €8,500. In the same sale, the ongoing importance of provenance was highlighted when an ordinary wooden chair which belonged to Patrick Pearse while he was headmaster of St Enda’s school fetched €8,500. The guide price was €1,500-€2,000.

Silver doesn’t often come into the spotlight these days, but there was a “white-glove” moment at a specialist silver sale from Purcell Auctioneers in Birr, Co Offaly in May. All lots sold, led by a set of eight Limerick dessert spoons which made €2,800 and a set of six Cork serving spoons by Carden Terry, which fetched €2,200.

THE WEIRD, THE WONDERFUL – AND THE ONE THAT GOT AWAY

Everyone loves a “sleeper” and there have been a couple of cracking results around Ireland this year, from the “High Nelly” bicycle which defied a pre-sale guide price of €100-€200 to sell for €7,000 at Mitchell’s Auctioneers’ Irish Bygone and Social History Auction in Roscrea, Co Tipperary in April, to the Georgian mahogany stick barometer/thermometer which made 37 times its bottom estimate to achieve a hammer price of €7,400 at Mullens Laurel Park in July. At Adams Blackrock in February, a 19th-century stoneware basin sold for €4,800, almost seven times its top estimate of €700; and at Adam’s on St Stephen’s Green in the same month, an oil-on-panel painting described as by an artist “in the circle of Carlo Dolci”, a painter who worked in Florence in the second half of the 17th century, was estimated at €4,000-€6,000 – but made €22,000.  Like every other year, this one had its share of sadness. In November the antiques world was saddened to hear of the death of Gráinne Pierse, who for many years ran Courtville Antiques in the Powerscourt Townhouse in Dublin, specialising in Georgian, Victorian, Edwardian and art deco jewellery. Back in July,  another shockwave ran through the collecting community when the Kilkenny auctioneer George Mealy announced his retirement after 45 years in the business.

And finally, after all the saleroom doors have closed for the final time in 2018, the sums have been totted up and the catalogues tidied away, there are always particular items which linger in the memory – for one reason or another – long after the gavel has slammed on the auctioneer’s desk.

For this writer it was an 18th-century walnut bureau bookcase, tucked in among the 1,054 lots of Sheppard’s Legacy of the Big House sale in Durrow, Co Laois in September.

Tanya Sweeney: Memories – good and bad – go wherever we do
6