Kenneth Webb: a life’s work on show at RDS

At 92, Webb still paints with gusto while his grandson explores the work using virtual reality 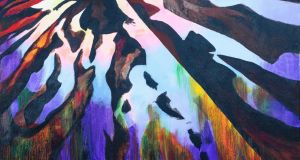 About to enter his 92nd year and one of Ireland’s oldest working artists, Kenneth Webb was born in London in 1927 and moved to Belfast in 1953 as head of painting at Ulster College. Tutor to some of the country’s most prominent artists such as Basil Blackshaw and Cecil Maguire, he still paints from his studio outside Clifden in Connemara, of which he says, “I have a personal theory that the moisture in the air acts like millions of prisms so you get this vibrancy of colour”.

He established the Irish School of Landscape Painting in 1959, which is now run by his daughter, the artist Susan Webb, and his latest exhibition at the RDS in Dublin, which is the largest ever showcase of his works, is in collaboration with this grandson Donovan Webb. Curated by the Kenneth Webb Foundation and one of the oldest galleries in England, Gladwell & Patterson.

The exhibition holds more than 160 paintings, from 1955 to works completed this year, in addition to videos and a virtual reality experience by his young grandson, a BT Young Scientist 2018 winner for his technology project.

Laid out in thematic format, including sections such as Atlantic Way, Marconi Bogs, and Bouquet, the exhibit includes a film shot by Donovan which shows the artist at work in a time-lapse video.

“It is quite incredible,” says son-in-law Matthew Weiss. “He whips off his shirt like a 40-year-old, and really you get the feeling that at almost 92 years of age, his work is really a covenant between him and his art, and is no longer about impressing people.”

The fusion of art and technology centres on the Tec-Tank, where poppies – one of the artist’s most popular themes – is presented as “poppy hyperspace” and the way the artist visualises Twitter. Set in a huge Perspex box filled with 10,000 silk poppies, motion sensors trigger two fans to float the flowers as visitors pass; an internal printer floats comments from Twitter when the hashtag #kwftectank is tweeted.

“That’s the way he sees Twitter,” says Donovan of his grandfather, “like poppies floating in the air, it was a very interesting project to work with him on; while I was focused on the individual parts, he really saw the whole picture.”

Visitors to the exhibition can take a poppy or paper tweet as a memento of the experience.

Virtual reality also plays a part of the experience whereby visitors, through the use of headsets, can join Donovan and Kenneth on a journey through his garden in Connemara – the inspiration and subject of much of the artist’s work.

All the works are for sale, and each evening is devoted to a different charity with 10 per cent of sales donated to that charity.

His latest works – five paintings from 2018 and exhibited for the first time, include Evermore and Covenant – reflect the words the late author John O’Donohue said of the artist over a decade ago: “His work is a homage to the secret life of colour, long may paintings continue to visit his imagination and bless our darkness.”