Days of wine, candlelight and bicycles recalled in Durrow sale 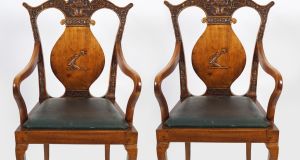 An unusual Irish carved mahogany wine cooler made by Williams and Gibton is one of the highlights of Sheppard’s Knockaphuca House sale in Durrow on March 3rd-5th, due to what Philip Sheppard describes as “extraordinary due to its quality, size and craftsmanship”(lot 556, €15,000-€20,000).

Irish appreciation of fine wine is not a new phenomenon, in fact it dates back over 300 years. Georgian Ireland quaffed so much claret that Jonathan Swift, in private correspondence, referred to claret as “Irish wine”.

A fascinating comparison table in Irish Links with Bordeaux by Dr Richard Hayes (1938), shows that imports of fine wine from the French region to Ireland during the period 1739-1740, were double the number of bottles imported to England, Scotland and Wales combined.

The Irish were among the most innovative and creative pioneers of viticulture in Bordeaux in the 18th century after the flight of the wild geese, and today 14 chateaux vineyards and two streets bear an Irish name.

In the late 1700s Thomas Jefferson, the third president of the United States, sought advice from Abraham Lawton, a wine broker originally from Skibbereen – and said to be the most powerful man in Bordeaux – with regards to stocking his personal cellar.

It would appear that our history, links and love of the grape would help to explain why Irish wine coolers from this era are so decorative and can fetch huge prices at auction.

In those days most grand estate had ice houses, whereby when covered with straw the ice remained frozen. Early coolers were generally oval or circular in shape with a lid in order to keep the wine as cool as possible, such as the one featured in the Sheppard’s sale.

The country sale is a real cross section of antiquities and includes the contents of Knockaphuca House in Castledermot, home to the late Philip Hennessey, which is currently on the market through Sherry FitzGerald seeking €575,000, in addition to other clients.

With extinction now a very real threat to the animal and plant kingdom, a turtle taxidermy (lot 173, €100-€150) comes to the auction circuit, less than a month after the discovery of 30 giant tortoises on the Galapagos Islands, thought to be extinct after the death of Lonesome George, the Pinta Island tortoise in 2012.

Until Lonesome Georges’ death conservationists had offered a $10,000 reward for a mate for the creature who was thought to be the rarest on the planet, until his descendants were found wandering on the island of Isabela earlier this month.

In a humorous nod, there is a great bronze statue of a rabbit wielding a shotgun, standing at almost 1m tall, perhaps protecting himself from the perils of the Irish hunting season (lot 755, €1,400-€2,400).

The sale also lists an old leather-bound ledger from 1920-1928 from Hennessy’s Garage in Kildare, which was the former business of Philip Hennessey’s family at Knockaphuca. It offers a glimpse into the social history of Kildare, Carlow and Laois with respect to cars, motorcycles, bicycles and their owners, over the period when Ireland had just become a republic.

Early members of An Garda Síochána are listed as buying bicycles, as are quite a number of women. It is well documented that the introduction of the humble bicycle helped lead to women’s emancipation. It gave them more social mobility, allowing them to travel further for entertainment and work, and was also the time when they first took to wearing trousers.

There is an entry in the ledger of policemen hiring a car to take a prisoner to Mountjoy, along with the doctors, solicitors and local priest purchasing cars. (Lot 1, €1,000-€1,500).

Another interesting offering in the sale is a pair of Russian porcelain and gilt bronze candelabra. The hefty €8,000-€12,000 estimate is explained by the fact that they come from the Gambs and Imperial Porcelain Workshop in St Petersburg, according to Philip Sheppard.

At this factory, pure gold, derived from melted gold roubles, was gilded onto porcelain, enhancing its design and truly distinguishing it as a prized possession for a wealthy family. The piece has been consigned by a German family who came to Ireland over forty years ago, and the Hermitage Museum in St Petersburg held a recent exhibition “The Decoration of the Russian Interior in the 19th Century: The Gambs Room” in honour of what they describe as ‘the best-known furniture maker in Russia’. sheppards.ie