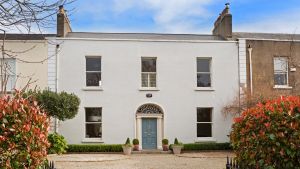 The owners of an early Victorian terraced house in Dún Laoghaire bought the property 15 years ago and five years later they embarked on a major renovation, aiming to bring light into what had been a dark house. Built in 1842, Osborne, 7 Mulgrave Terrace, is a protected structure and any changes or extensions had to keep to the original imprint: conservation architect Dave Shannon of Dún Laoghaire firm The Architects took on the job, designing a large bright kitchen extension at the back of the house.

Glazed extensions to period houses became more common during the Celtic Tiger years, but this one is subtly different. Most of all, it brings light from the back to the front of the house: you can stand on the patio outside the bifold doors in the back garden, says the owner, and see people walking down the street outside the front garden.

Most of the house retains its original, classically simple layout, with period details that include the fanlight over the restored front door, the cornicing and coving in the front hall and working shutters on sash windows. Décor throughout is understated, with walls mostly painted pale shades of grey with contrasting white woodwork.

The family room on the left of the hall has no mantelpiece, but a wood-burning stove in the chimney breast. Double doors in a wide arch open into the dining room with another wide arch from here opening into the kitchen. Two stained glass light boxes on the wall in the dining room – originally panels from the front door of one of the owners’ childhood home – are a striking feature, not included in the sale but subject to negotiation.

The kitchen is very bright, with two large roof lights, a long island topped with pale quartz to match the countertops, mint/grey units and a pale Marmoleum floor with underfloor heating. A frosted glass door in the corner of the kitchen opens into a long narrow space that has a well-fitted utility room at one end and a good-sized modern bathroom with an oval bath overlooking the back garden.

Bi-fold doors open from the kitchen onto a large sandstone patio in the landscaped back garden, planted with ferns and bamboos, with a small square of artificial lawn and a raised seating area at the back.

Upstairs – past a very tall arched window on the return – there are four double bedrooms. Two on the right of the top hall are linked by double doors and have large marble fireplaces, obscured by double beds placed against them. There’s a family shower room at this level and an en-suite shower room just outside one, slightly smaller, bedroom. You can see the zinc roof of the extension from the back bedrooms.

There’s lots of space to park in the gravelled and railed front garden.

Osborne is near the corner of Tivoli Road and Mulgrave Terrace, a short walk from Dún Laoghaire town centre.