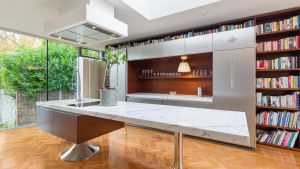 With a comprehensive renovation undertaken less than 10 years ago, the aptly named Alta Vista – at the top of Knapton Road in Monkstown – comes to the market in hang-up-your-coat, move-in condition. Two over-basement Victorians in Dublin come in many sizes – this with 570sq m (6,135 sq ft) is very much on the supersize end. It is in fact, three storeys over basement – the bedrooms are spread over two top floors – and even at that the owners extended to the side when they bought in 2011. The reason was not to gain extra space for the rambling family home but rather to help reorganise it.

The house was in three units when they bought, one of them a self-contained flat in the basement. Wanting to renovate and keep that unit for family use, and not wishing to convert one of the very grand hall floor reception rooms into a new family kitchen, building the modern addition to the side was the solution. “It’s modern, we didn’t want it to be a pastiche,” says the owner of the clearly contemporary glazed-walled side extension.

In keeping with that aesthetic, the eat-in family friendly space which overlooks the front and rear garden has been fitted with a dramatically modern Philippe Starck kitchen – a rare find in an Irish home.

One of four designed by the French visionary for Warendorf, it features a freestanding functional unit housing concealed cupboards and appliances – surrounded by bookshelves accessed by their own ladder. He calls it a “library design – to combine culture and food in a domestic setting” and it includes an island unit fitted with the hob where the worktop sits on striking chrome trumpet legs to conceal plumbing and electrics. Beside it the owners showed a traditional side by installing an Aga. The size of this room is very much in keeping with the grand scale of the three reception rooms on this floor where even the inner hall is roomy.

The self-contained one-bedroom unit is at basement level.

The house stands on 0.2 acres and the substantial rear garden with its original granite walls has been landscaped and divided into sections. There is parking for several cars to the front.

Before the current owners came along in 2011, Alta Vista had been on the market for three years. It wasn’t the length of time that caused comment then but the price drop, speculated by some as the one of highest percentage drops for a residential sale in the years immediately following the property crash.

It came on the market in early 2008 in need of complete renovation and subdivided into units seeking €4 million, before dropping to €2.9 million at the end of that turbulent year. By 2010 it had been reduced further to €1.8 million where it stuck firmly before selling to the current owners in 2011 for €1.1 million. Such was the scale of the work required they spent nearly a year on the renovation before moving in. Alta Vista at 2 Knapton Road is for sale through Lisney seeking €2.7 million.