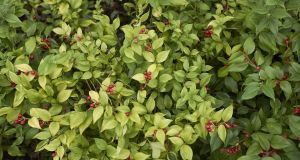 The red berries of Sarcococca ruscifolia.

If you’re one of those gardeners possessed of a strong sense of smell, you’ll be intimately aware of the myriad of ways in which it connects us to the natural world, triggering a sequence of powerful reactions deep within the brain’s limbic system strongly associated with memory and emotions.

In the garden, this vast and complex calendar of smells – the scent of damp, dark, freshly dug soil in spring, the fresh tang of newly cut grass, the heady, high-summer sweetness of jasmine, the damp, fungal whiff of rotting autumn leaves – also connects us intimately to the ever-changing seasons.

I can’t, for example, smell the waxy, star-shaped, lemon flowers of the shrub know as wintersweet (Chimonanthus praecox) without thinking of the finger-pinchingly chilly winter walks that I took as a horticulture student in the grounds of the National Botanic Gardens in Glasnevin. It was there that this large, slow-growing, deciduous shrub bloomed against a sunny wall, releasing its powerfully spicy fragrance on still, bright days. A plant for milder, sheltered gardens (a bright courtyard is ideal), it likes a fertile, well-drained soil in full sun and can be grown as a freestanding specimen or trained against a wall.

To fill a tricky, shady spot, try winterbox or sweetbox (Sarcococca), the hardy, compact, evergreen shrub whose tiny, turbo-scented blooms are another of the joys of the winter garden. Whenever I catch the scent of their perfumed, spidery flowers hanging in the cold still air of a winter’s day, I’m reminded of the sticky black vanilla pods that I marvelled at as a child, intrigued by the intensity of their fragrance.

Of the different species/ varieties available, Sarcococca confusa is the earliest into bloom, producing its clusters of pale flowers from December to March.  Others worth seeking out include the new hybrid variety known as Sarcococca ‘Winter Gem’ and Sarcococca hookeriana var. digyna ‘Purple Stem’.

Likewise, when I catch the scent of a witch hazel in full bloom, its sharp, spicy perfume prompts memories of a country garden now long gone where its luminous yellow flowers glowed in the subdued half-light of a winter afternoon, filling the air with their distinctive smell.

Naturally large but very slow-growing, this deciduous shrub (properly known as Hamamelis) does best in full sun or light shade and in an acid/neutral soil, but is tolerant of alkaline soils as long as they are deep, friable and fertile. Of the many varieties available, two of the best and earliest into flower are Hamamelis intermedia ‘Jelena’ (toffee-orange long-lasting, lightly scented flowers from December to February) and H. intermedia ‘Pallida’, a garden classic with sulphur-yellow, sweetly scented flowers from December to February

It is, of course, the scarcity of scented flowers in the winter garden that makes them so precious. If it wasn’t for the intensely perfumed, pale, tubular blooms of winter honeysuckle – a medium-sized, hardy shrub with an ungainly growth habit – I doubt that it would earn a place in many gardens. But in winter the magic of scent holds a special kind of sway and to be suddenly enveloped by the sweet, clean, woody fragrance of this hardy shrub’s pale flowers on an icy, dark January day is to be reminded that nature – and life – endures.

Of the various species/varieties available, two of the best are the semi-evergreen Lonicera x purpusii ‘Winter Beauty’ and the more compact Lonicera elisae (formerly L infundibulum var. rockii). Both like an ordinary garden soil in sun or light shade with shelter from strong winds.

Viburnum x bodnantense is another deciduous, ultra-hardy, medium-sized shrub that dramatically comes into its own in winter, producing flushes of its intensely perfumed pale white or pink flowers on bare branches from November until March. Happy in sun or shade as long as it’s given a fertile, moist but well-drained soil, the classic variety is the pale-pink flowering Viburnum ‘Charles Lamont’ which grows to an average height and spread of 3m x 2m.

Yet another shrub that packs a powerfully scented punch is Daphne odora (the clue is in the name), which produces its clusters of richly scented, pale-pink flowers from January to March. Not suitable for cold gardens, this slow-growing, evergreen shrub needs a fertile, well-drained, humus rich soil and a sheltered spot in either full sun or light shade.

If variegation is your thing, seek out the variety known as Daphne odora ‘Aureomarginata’, whose leaves are thinly edged with a gold margin that slowly fades to cream.

Some of the loveliest of winter-flowering scented plants are also compact enough to be grown in containers. Examples include the reticulate irises, whose dainty, deeply perfumed flowers grow to just 15cm tall and appear in late winter. Traditionally planted as bulbs between September and November, you’ll also often find these dwarf bulbous perennials in garden centres at this time of year as pot-grown plants.

Of the many different varieties available, Iris ‘Katharine Hodgkin’ is prized for the delicate beauty of its light-blue and egg-yolk yellow flowers while Iris ‘Pauline’ has rich-purple, velvety flowers with bright white splashes on the falls (the lower petals). Native to the Middle East, reticulate irises need a very sheltered spot and a rich but gritty, very sharp draining soil in full sun.

To fully appreciate their subtle beauty and delicious perfume, plant them in a raised bed, trough or sunny window-box and cover the soil/compost with a top-dressing of fine horticultural grit to protect them from rain damage.

While gardeners prize them for their dainty white flowers, many varieties of snowdrops are also perfumed. Among the best is Galanthus ‘S Arnott’, whose sturdy, large, honey-scented flowers appear in late winter. Tolerant of a wide range of soils as long as they don’t dry out in summer, snowdrops are perfect for planting to the front of a border or to let naturalise in a lawn or woodland but will also grow happily in a pot or stone trough.

Last but not least are the handful of winter-flowering climbers with delicately scented blooms. Examples include the borderline-hardy Clematis urophylla  ‘Winter Beauty’, whose bell-shaped, white flower appear from December to February, Clematis napauliensis (November to March) and Clematis cirrhosa ‘Jingle Bells (December to February). All need a sunny, sheltered site or can be grown under cover in a conservatory, yet another lovely way to enjoy the magical perfumes of the winter garden.

As long as they’re not too large and the ground isn’t waterlogged or frozen, this is a good time of year to move young, deciduous trees and shrubs, which are now in winter dormancy. Always pre-dig the new planting hole before digging up plants to make the transplanting process as quick as possible and protect the roots from drying out.

Rather than using a wheelbarrow to transport the plant to its new location, it’s generally easier, kinder on your back and less messy to place it on a strong plastic bag or sheet and then pull this along the ground.

This is a great time of year to tidy out garden sheds and glasshouses, make repairs to any garden structures, clean and sharpen garden tools, and send garden machinery such as strimmers and lawnmowers in for a service before the rush of spring.