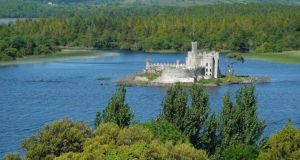 McDermott’s Castle: the guide is set at €90k

A majestic castle set on an island in Lough Key in Co Roscommon is one of the most striking lots for sale in the upcoming BidX1 pre-Christmas auction. The picture-postcard ruins of McDermott’s Castle, whose foundations date from the 12th century, are set on their own half-acre island. With its battlements and buttreses the castle looks as if it could withstand an army, but having been partially destroyed by fire in the 1940s it needs complete refurbishment, hence the come-hither price of €90,000. Buyers will need to have very deep coffers if the island is to be restored to its once proud state.

Meanhile in Dublin, the classic French bistro premises Chez Max, by the gates of Dublin Castle, has been entered in the large-scale property auction on December 13th, having failed to sell through a regular private treaty sale earlier this year. The restaurant continues to operate from the premises.

BidX1 has put a guide price of €625,000 on the premises, which occupies the ground floor and basement of a Georgian building at l Palace Street adjoining the castle walls, close to the junction with Dame Street.

The upper floors of the building, w hich are accessed via a separate front door, are not part of the sale but the bistro’s outdoor terrace to the rear of the building is included.

Whoever buys the premises can bank on a rent roll of at least €35,000 per annum, to the end of the current lease in 2024. However, five-yearly rent reviews built into the lease could see the rent go up next year.

The premises first came on the market in February of this year, asking €725,000 through Savills, but it failed to find an investor at that price, despite buzz surrounding the Dublin restaurant market.

The lower price guide could lure investors out into the market, with the possiblity of striking an end-of-year deal.

More than 230 lots will be offered in what is likely to be the last major auction of the year, with scores of commercial units for sale as well as a large collection of houses, apartments and holiday homes.

Residential lots feature some Dublin apartments, including collections of units in Harold’s Cross and Fairview, and a three-bed duplex by Grand Canal with a guide price of €495,000. A large number of rural properties range from family semis in the outer suburbs to partially built homes in commuter counties, and one or two striking holiday homes, such as a five-bedroom house in a stunning setting in Dunquin, near Dingle, Co Kerry, which is guided at €150,000. The residential auction will take place on December 12th.

The commercial lots are more varied, with sites , sheds, shops and industrial estates for sale. These sit alongside a collection of eight Bank of Ireland branches which have guide prices ranging from €710,000 for a branch in Edenderry to €1.89m for the bank’s Loughrea offices.

BidX1 auctions attract a wide range of buyers, from househunters hoping to pick up a bargain to those prepared to bid high on more unusual proerty lots. Earlier this year, Shanagarry Tower, a former laundry tower overlooking the Luas bridge at Milltown in Dublin 6, sold for €136,000 at a BidX1 auction – almost four times its guide price.