What’s really in your block of butter?

The ingredient list on Irish butter is not long, but the calories are high 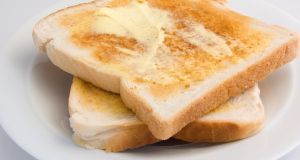 The sight of an Irish tricolour on the front of any food packaging sets my label antennae tingling. Is this product really Irish?

Or has it just been placed into its box or wrapper in this country? As with all the best thrillers, things are not always as they seem. By now, most of us will have spotted packaging that seems to contain Irish produce, but doesn’t.

When it comes to butter, however, you can be pretty sure you are getting butter from somewhere on the island of Ireland. There are others, such as Danish Lurpak or Marks and Spencer’s UK offering, but they don’t fly our flag. Even the German brands Aldi and Lidl sell Irish butter.

But what else can you tell from the packaging?

As the ingredient lists show, not a lot goes into Irish butter. It’s usually just cream and two per cent salt or less, unlike in other countries such as America where there may be added colour and flavouring.

All that cream, of course, means that there is fat – and lots of it. Butter is about 80 per cent fat, with most of that saturated fat. You can see this from the nutrition panel on Kerrygold, for example, which shows that each 100g of butter has 80g of fat, of which 53g is saturated.

So how much is a normal serving?

How much would you use on a slice of toast? Those individually wrapped pats of butter that are barely enough for one slice are just 7g.

Unfortunately, a diet high in saturated fat is linked to raised LDL (bad) cholesterol levels, which can increase your risk of heart disease and stroke.

The World Health Organisation recommends that our total fat intake should not exceed 30 per cent of total calories and intake of saturated fats should be less than 10 per cent of all calories or under about 30g in a day. That’s from all sources, including other dairy produce, meat, cakes and biscuits. (Just one Mars bar has 4g of saturated fat.) My preference is to skip the junk and have some butter, but not too much or too often.

Another option is low-fat butter such as the offering from Connacht Gold, which is owned by Aurivo, an Irish agri business with brands in dairy ingredients, sports nutrition, animal nutrition, retail and lifestyle stores. It has just half the fat of regular butter. It has achieved this by adding water, milk protein, lactic acid, potassium sorbate as a preservative, beta carotene for colour and vitamins A, D, and E.  Just be aware, though, that the label on the side of the packet saying each portion has just 19 calories and 1.3g of saturated fat, it is talking about a 5g portion, which is far from generous. It also got a Great Taste award in 2014.

Cuinneog Irish farmhouse country butter, which is made in Co Mayo, does even better for awards, picking up a prestigious Great Taste award eight times. For this country butter, the pasteurised cream is slowly heated and fermented, then churned in a traditional-style butter churn. Other butter from bigger brands such as Kerrygold and Avonmore are described as “creamery” butter. It sounds lovely, but the creamery is just the place were the co-ops or dairies process the milk from many farms.

It’s easy to compare prices because most come in similar-sized packaging, of 227g or 454g. Beside that figure you will see a lower-case “e”. That is the “estimated” sign and its shape is defined by EU directive. How much the quantity inside each packet can vary is regulated by the EU. The “tolerable error”  decreases as quantity increases so it can be 9 per cent for smaller amounts but just about 1.5 per cent for products of around this size.

It’s what’s inside that counts.