Dublin mirrors California? And no, it’s not the weather

The New York Times is reporting that a housing crisis has gripped California. Sound familiar? 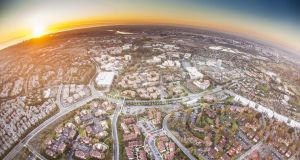 Orange County, California: the average cost of a home in California is now $500,000, twice the national average

It’s rare that Dublin can compare itself with sunsoaked California living, but it seems there are parallels to be drawn sometimes.

A New York Times article this week stated that a “full-fledged housing crisis has gripped California, marked by a severe lack of affordable homes and apartments for middle-class families”.

Sound familiar? Maybe this will help: the average cost of a home in California is now $500,000, twice the national average. Latest CSO figures show that the average price of a home in Dublin is moving towards the €400,000 mark and is already well above €500,000 in the wider south Dublin area. Meanwhile, the national average remains about €250,000.

With homelessness on the rise, it is becoming commonplace in Los Angeles for people to take up residence in recreational vehicles (RVs).

There has now been something of a backlash against Nimbyism – Not In My Back Yard – whereby policy makers are being called on to deal with communities that are resistant to new housing construction proposals. The article also cited the emergence of “Yes In My Back Yard” organisations which are calling for an end to strict zoning and planning regulations.

With unemployment down, and the Californian economy performing well, property values are rising so fast that middle and lower income earners are being priced out, and forced to drive several hours daily to and from work.

A bill was passed by the US senate last month that would restrict communities’ ability to use zoning, environmental and procedural laws to stop projects they deemed out of character with their neighbourhood. It’s a move not dissimilar to the new fast-track planning laws for large-scale new homes schemes introduced in Ireland, though that has been slow in the delivery.

As Brexit becomes a reality, and with an anticipated influx of mid-level and senior executives relocating from the UK, it’s clear that a similar strategic approach to housing would be far preferable to the usual ad hoc-ery we’re used to.

Let’s look again at density and reconsider high rise, or offer incentives to companies relocating from the UK to move to areas outside Dublin. That way all boats might rise, rather than sinking the already overburdened one.