English soldier’s 1916 Rising mementoes to be sold in London 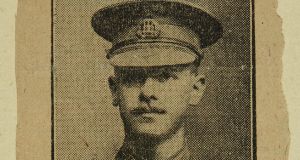 The 1916 centenary commemorations - like the event itself - have now slid into history but items associated with the Easter Rising continue to surface at auction.

Last month in London, a typed “Order of Surrender” signed by the leader of the rebellion, Patrick Pearse, sold for £263,000 (€299,000) at Bonhams after what was described as “fierce bidding in the auction room, on the phone and on the internet”.

The price was over double the top estimate £80,000-£120,000. The result will have reassured collectors of historical memorabilia after a much more valuable handwritten version of the “Order of Surrender” withdrawn from auction in Dublin last year when bidding fell well short of the estimate (€ 1 million- € 1.5 million)

But what about Easter 1916 memorabilia from the other side of the Irish Sea? The Rising may have had profound consequences for Britain but, at the time, it was a minor military distraction given the all-engulfing crisis of the first World War. In many cases, the British soldiers involved in quelling the Rising were soon sent to the Western Front and Ireland was quickly forgotten.

Within 24 hours Cooper went from training for deployment on the Western Front to fighting on the streets of Dublin.

One such soldier was Donald Keith Cooper, a Second Lt. in the 8th Northants Regiment. He was attached to the 6th Battalion of the 2nd South Staffordshire Regiment when they were suddenly and unexpectedly despatched to Ireland early in the morning of Tuesday, April 25th, 1916. Within 24 hours Cooper went from training for deployment on the Western Front to fighting on the streets of Dublin.

At the end of the Rising Lt. Cooper was placed in charge of Liberty Hall and the nearby Customs House. He re-joined his regiment on May 10th and by late July was in France. But en route from Dublin to France he had brought home some souvenirs of the Rising in Dublin which were kept in an album by his father which has now turned up at Sotheby’s and will go under the hammer in a Literature auction in New Bond Street, London on Tuesday.

Lot 22, described as an “exceptional collection of printed ephemera relating to the 1916 Rising salvaged by the British officer in command at Liberty Hall” is estimated at £15,000-£20,000 and includes three extremely rare handbills printed for Joseph Stanley during the course of the Rising itself, ephemera printed for the Irish Citizen Army, some items which are noted as having been “taken from Rebels”, maps given to British officers to navigate the streets of Dublin, postcards and “Sinn Féin Favours” (tricolour lapel badges”).

Cooper’s souvenir copy of the “exceptionally rare half-sheet of the Irish Proclamation” is being sold separately as Lot 23, with an estimate of £6,000-£ 8,000. The Proclamation was printed – famously in two halves – at Liberty Hall on Easter Sunday 1916. When British soldiers retook Liberty Hall on April 27th they found the type standing in the press and ran off a few copies out of curiosity and as mementoes.

There’s a poignant postscript to the collection. The Battle of the Somme was raging when Lt Cooper was sent to the Front on August 28th, 1916 and less than two weeks later he was killed in the carnage at High Wood on September 9th. He was aged just 22. The wood, near the village of Bazentin le Petit was the scene of appalling carnage. Between July and September 1916, an estimated 8,000 British and German soldiers died. Cooper’s family had only the comfort of the mementoes of his short life – among them these “souvenirs” of his brief and turbulent stay in Dublin.