As traditional Irish hostelries in US decline, Nu Irish Bars are gaining momentum 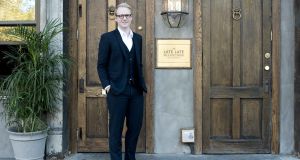 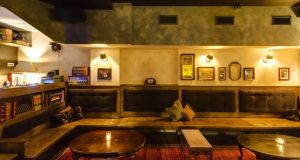 The Late Late Bar New York: “We don’t serve Guinness in pint form, instead we have a range of Guinness cocktails; our burgers are served with Ballymaloe relish and our Tayto crisps are served in an brioche bun with pickles.” 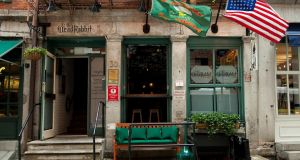 The Dead Rabbit, down in the Wall Street area of the city, has enough Barry’s tea and King crisps to feed an army, but also has a bleeding edge drink and food menu 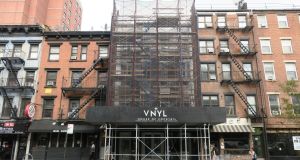 A Leitrim GAA match from the 1950s on the TV, an Irish showband tune ringing out, a plate of hairy bacon and watery cabbage, the exponential round system, standing for the national anthem at the end of the night – it can only be the lower east side of New York city.

There’s not an Irish person who hasn’t either worked or drank in an American Irish bar.

For centuries now they have double-jobbed as the bank, the post office and the community centre for the Irish person over yonder.

Pictures of JFK and the pope vied for space in these hyper-real dens of sentiment and support.

They were a life-support machine for generations of immigrants, but their pulse has been weakening for decades now and they’re about to be put out of their misery.

In early September the oldest Irish bar in the US, Patrick’s in Baltimore, is shutting up shop.

The venerable establishment on Pratt Street has been a huge favourite among local and stranger alike since 1847. But with the newer generation preferring Jäger to Guinness and carpaccio to coddle, it’s not just Patrick’s in Baltimore becoming superannuated. In New York – the spiritual home of the Irish bar – close to 50 per cent of the city’s Irish-themed hostelries have become a Starbucks, an Abercrombie and Fitch or an Apple Genius Bar; as all is changing, changing utterly.

People were bouncing into the Irish bar looking for an espresso and the code for the wifi, they were asking for unpronounceable craft beers and if the chicken in a basket was free-range and organic. Not to mention gender-neutral restrooms.

Even the Irish themselves gave up on the Irish bar, urbanely appalled by the high-GI food, the yellowing copy of the Longford Leader and some old crone in the corner singing Mary from Dungloe.

But paradoxically, the best and most critically acclaimed new bars in New York are all of the “Nu Irish Bar” type. Like the Irish politician who was once said to have declared: “Here’s my set of values, and if you don’t like them, I’ve another set you can look at”, the Nu Irish bar is proving to be ideologically flexible.

Yes, there are now lobster-stuffed deviled eggs on the brunch menu, but if you’re looking for a Tayto sandwich on batch bread they’ll serve it on a retro platter for you. If you want the latest, greatest, most up-to-datest cocktail concoction, they’ll ask you if you want it topped off with a splash of Taylor Keith red lemonade.

The Dead Rabbit, down in the Wall Street area of the city, has enough Barry’s tea and King crisps to feed an army, but also has a bleeding edge drink and food menu. Last year at the International Booze Oscars, it was voted best bar in the world. Pastiche or parody? Who cares when you’re rammed every night of the week.

If it’s the best pint of Guinness in New York you’re after, you’ll find that in Greenwich Village’s Spotted Pig bar/ restaurant. It’s part owned by ex-U2 manager Paul McGuinness and Jay-Z, and while the Michelin star restaurant has an Irish twist, up at the bar you can get to see Beyonce getting dug into her stout and various U2ers hanging out.

The talk of the town though now is The Late Late Bar in the east village. From J1ers who just never bothered to return home to a healthy Hispanic contingent, The Late Late nods and winks to its Irish roots, but has perfectly acclimatised to local conditions. It’s owned and run by Dubliner James Morrissey, who cut his teeth promoting club nights in his native city. Morrissey took a near academic approach to the continuing evolution of the Irish bar when setting up The Late Late. “When I first arrived over here, I studied how the Irish bar has played such a significant role in almost every large city in the US,” he says. “The model used was a stereotypical one and the interior design, the food and beverage menus, the music content, even the name of the pub itself, was from a different era. That’s why they are struggling to stay relevant today”.

Morrissey turned down the volume on the Irish bar claim and instead went for an Irish-inspired approach. “For example, we don’t serve Guinness in pint form, instead we have a range of Guinness cocktails; our burgers are served with Ballymaloe relish and our Tayto crisps are served in an brioche bun with pickles.”

If you look hard enough you’ll see religious relics and other obligatory Irish bar memorabilia, but you’ll also see Arcade Fire holding court at the bar. And if you get a bit dizzy from the Citron and Grand Marnier cocktail, you can order a can of Club Orange to set you right again.

But what the Dead Rabbit and The Late Late have really done is freed the Irish bar from its too-tightly knotted moorings. As I get up to leave The Late Late, a handball team from Haiti are on their way in. They order 10 Prosecco and Guinness, four Ballymaloe burgers and six nachos with Dubliner cheese .

But if you want to see how the Irish bar looks with the ultimate makeover, James Morrissey’s new venture, VNYL House of Cocktail opens next month. A massive 650sq m (7,000sq ft) space over three floors in the East Village, the restaurant/bar was inspired by Phil Lynott and Thin Lizzy.

“We’ve brought in a special interior designer (Sarah Abdallah), who has custom-designed every item of furniture in the venue, and all of her designs are being manufactured by Orior Furniture in Newry, Co Down,” says Morrissey.

“To have an Irish-owned family business fabricate all the pieces in our New York venue and have American customers seeing the level of sophistication that can come from Ireland makes me proud, and also motivates me”.

VNYL’s resident chef, Jordan Andino, is something of a celebrity in that he is the Kardashians’ personal cook and has featured on their reality TV show. The music director of the new venue is the famous actor Adrian Grenier (best known as playing the lead role in the TV series Entourage). While VNYL is not obviously Irish, it is Irish-owned and Irish-influenced. Framed hand-painted portraits of new-generation Irish icons will grace the walls and an atmospheric photograph collection by noted Irish Times photographer Eric Luke will add to the ambience.