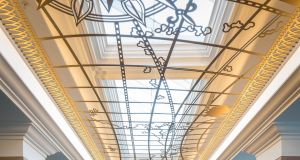 It’s a sure sign that the economy is on the up and up when hotels are back refurbishing their rooms. The usual eight-year cycle was disrupted over the past decade with many hoteliers holding on by fingertips, unable to carry out even a freshen-up. Scores of properties were in the hands of Nama and being run by accountants and that wasn’t good for new ideas either.

Now, however, the interior designers are out and about and making some wonderful changes to hotels.

At the Eccles Hotel in Glengarriff where Pippa Middleton and her husband, James Matthews, stayed recently, manager Aileen Hanley is overseeing the refurbishment of the 250-year-old property.

“We have been going through the archives of the hotel and will keep the refurbishment in the style of the old design,” says Aileen. “I found a lot of amazing pieces of antique furniture hidden around the hotel and have sent it to Joop Duyn in Kenmare for restoration.” The hotel has refurbished 36 rooms and will reduce the overall number from 66 to 58, allowing for more suites. The Garinish Restaurant has had a makeover and its only third paint job in 250 years, “a lovely soft grey.”

The Trident Hotel in Kinsale is a popular marine hotel with its prime coastal location. The last six months have been a busy time at the hotel as they have transformed a more formal property to a light, airy hotel with a palette of seaside colours of blues, whites and rosy pinks.

Interior designer Daphne Daunt drew on the surroundings to bring the outside into the hotel, with colours totally at ease with the waterside setting. “I wanted to get away from the sameness of world hotels and bring out the individuality of the Trident,” she says.

“It is probably more a domestic palette than one might have expected but I wanted the rooms to be cheerful and friendly and have interesting things to look at,” she says.

Hal McElroy, who has been general manager of the Trident for 30 years, thinks that the redesign flows well and has brought more light into the hotel. “Some of the rooms now feel like you are on a cruise liner,” he says.

Daphne speaks highly of the Irish craftspeople that provided furniture, fabrics and soft furnishings for the hotel. Specially commissioned furniture was made by O’Donnell’s of Skibbereen including art deco-style dressing tables in vibrant red. The soft furnishings were made by Ken Jackson’s team in Cork and the acres of curtains by Buggy Curtains in Ballon in Carlow.

“I fell in love here” – so says the Tracey Emin neon LED sculpture over the reception at the Dean Hotel on Harcourt Street, setting the tone for the first hotel to open in Dublin since the recession. The hotel is a taste of industrial urban architecture and was designed with a well-travelled demographic in mind, incorporating current culture.

Clad with a face of brown Georgian bricks and black painted window-frames, the interior is awesomely hip. It is dark – almost cave-like – dotted about with interesting pieces.

Behind that Georgian front had been a blocky office building. When stripped back, designer Anne Marie O’Neill of O’Donnell O’Neill Design Associates saw a canvas of concrete and big windows that could be used to great effect.

The lobby was influenced by hotels such as the Hoxton in London and the Ace in New York where there is a buzz all day from guests and people dropping in. It is a community space, welcoming people for breakfast, lunch, snacks and cocktails. The inviting area has long metal desk running through it and provides high speed wifi and sockets for visitors.

O’Neill’s advice for people who are considering making changes in their homes is to be bold and brave with darker colours. Use bold features, bold artwork and even neon to enhance spaces. Her main suggestion is lighting: “If you do not light a space properly it affects mood. Lighting is about making us look attractive and a well-placed light-fitting with warm colour tone bulbs is perfect.”

At the recently refurbished Conrad hotel just off St Stephen’s Green it was out with beige and cream and in with colours inspired by the vibrant Iveagh Gardens. Tom Strother, of Fabled Design Studios of London, chose his palette from the charming garden with its hidden curiosities. He wanted hotel rooms to be calming. “People do not want to stay in art galleries – hotels in Dublin are quite old-fashioned,” he says.

His design for the bedrooms was to have a two-textured flooring with carpet around the bed and limed, fumed oak in a herringbone pattern on the rest of the room. The pale green of the bedrooms makes them feel peaceful. Desks are free standing, facing into the room rather than looking at walls.

Tom sees the importance of the seamlessness of technology and things being hidden much more within the design elements. “Lighting and media controls are so complicated. Rooms should be much more intuitive – everyone should be able to turn the lights off from the bed,” he said. The redesign of the Conrad cost €13 million.

It probably will not surprise anyone to hear that Francis and John Brennan are their own interior designers at the Park Kenmare. Recently they have worked on a number of the larger rooms at the hotels and some of the corridors.

The new colour theme in some rooms is chartreuse green to bring the outdoors inside. They used it as a fabric, and have it on sofas and cushions. “We are a classic hotel and you cannot go with mad colours. Rooms are modernised by new sofas, cushions, wall coverings and curtains.”

He also had a word of warning about curtains: watch the weight of the fabric and hang the curtains on the correct track. Curtain rods are also better for protecting the fabric and reducing wear and tear.