Dreaming in Donegal: US House Hunters look to ‘old sod’ for properties 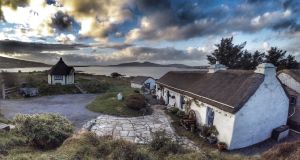 Having been anointed as the coolest place on the planet by National Geographic magazine, Ireland’s most north-westerly county is back in the headlines, this time it’s American television channel HGTV’s property programme House Hunters that is bigging up the county.

The show is broadcasting a Dreaming in Donegal special on the eve of St Patrick’s day , showcasing the charms of the county to what local estate agent Keith Anderson hopes will be a new generation of American buyer lured by visions of cosy cottages along the Wild Atlantic Way .

US citizens, who now account for around 22 per cent of overseas purchasers in the Irish market, according to Real Estate Alliance chairman Eoin Dillon, whose company held a property showcase in New York last week.

Anderson, a former president of the Institute of Professional Auctioneers & Valuers (IPAV), also travelled to the US to create a bilateral agreement with the National Association of Realtors (NAR), to help make the process of buying in Ireland easier for Americans.

On Friday’s show a buyer from sunny California with a budget of about €200,000 is shown three different properties, two within the limits of small villages, south of Donegal town and one in the wilds of the Bluestack Mountains lonesome landscape.

While Anderson is sworn to secrecy as to which one she finally chooses it is worth noting that two were less than 20 years old and the third, while a traditional cottage, had been completely modernised. They were all relatively sizeable, at least when compared with the Dublin market – each ranging in size from 140sq metres to 160sq metres.

This is a county where you get a lot of house for your money especially in the northern half, in the regions west and north of Letterkenny, the territories most affected by the uncertainties of Brexit and where coastal buyers tend to be from the north. Traditional waterfront cottages abound and are reasonably priced compared to similar properties in other seaside locations such as Connemara. Take Jacobs Cottage, a 200 year old cottage overlooking Trawena Bay about 10 minutes drive from Dungloe. Set on half an acre and with a one-bedroom guest cottage the four-bedroom house, which was painstakingly refurbished by a Dutch couple, has been for sale for some time priced at €225,000.

Anderson says that Dubliners have only discovered the county in recent years, that those who used to go to Courttown have been charmed by the scenery, the slower pace of life and the value for money property. The new roads help too. The south of the county can be reached from Dublin in 2½ hours.

In Rathmullan, a beguiling little village on the shores of Lough Swilly and the port where the Flight of the Earls took place in 1607, number 3 Coastguard Station, is to be auctioned, with no reserve, on April 4.

“The interest has been unprecedented,” says agent Gareth McLarnon of Glen Estates, with more than 150 parties registered and more than 60 legal packs sent to would-be buyers.

The two-storey property overlooks the same waters that chieftans O’Niall and O’Donnell watched receding into the distance from the stern of their craft all those years ago.

While part of a historic terrace the three-bedroom, mid-terrace property, which measures about 1300sq feet, was gutted 15 years ago, with its exterior walls its only remaining period details.

The decision to go to the market without a reserve is not a marketing ploy but rather part of the very clear instructions of the estate of its deceased owner, popular local woman Mally (Mary) Stanford, who died last September, agent McLarnon explains.

“The buyer will probably use it as a holiday home with a view to potentially retiring here in the longer term,” he explains.